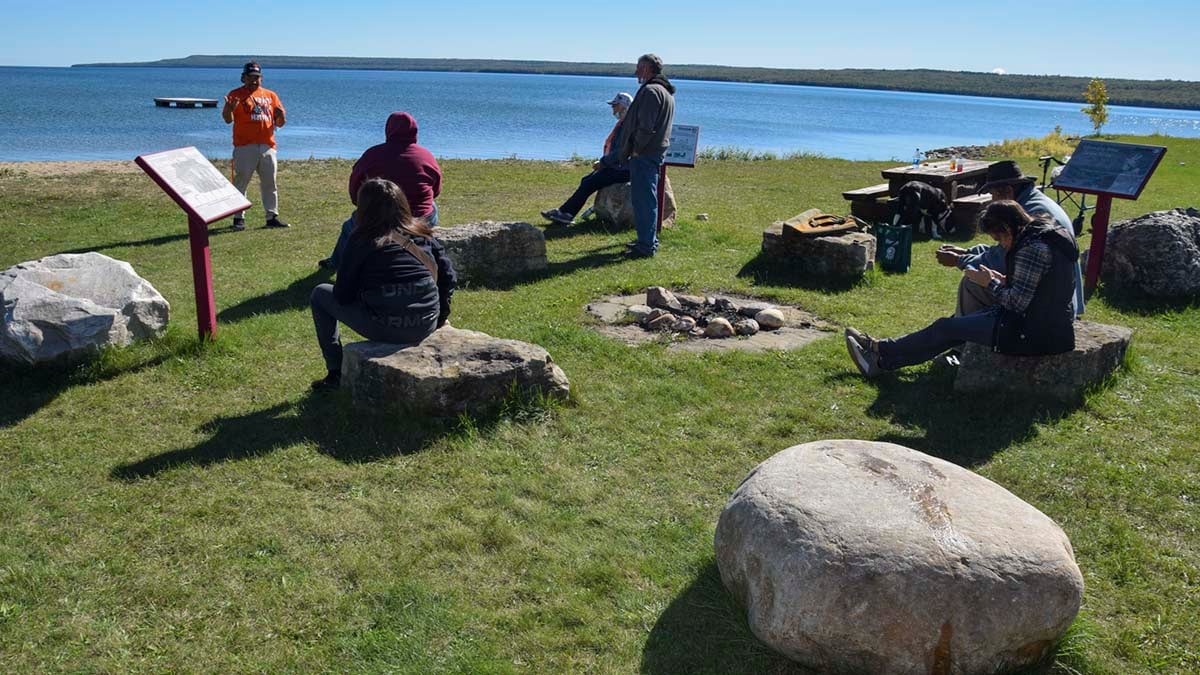 ﻿WIIKWEMKOONG—Recognizing the need to better understand what the words “truth” and “reconciliation” mean, Wiikwemkoong Tourism has developed an innovative approach to defining what these words mean, seen through an Indigenous lens: Reconciliation Tours .

Wiikwemkoong Tourism has developed educational community tours focusing on the Manitoulin Treaties, the history of the creation of these treaties, and the residential school system that touched generations of community members and whose legacy still reverberates throughout the community.

Guide Jack Rivers, son of Baa Paul Williams, has spent countless hours browsing the historical records available, both those in the community archives and the documents and books collected by his late father. During the three-hour tour, the eloquent Mr. Rivers provided an engaging and concise summary of what he discovered during these research expeditions.

In addition to providing the foundation for the development of Reconciliation Tours, research conducted by Wiikwemkoong Tourism has laid the foundation for this organization’s regular summer tours offered to cruise ship visitors and other tourists seeking to learn more about the community. .

The tour’s first stop was at Two O’Clock, a community located near the southern border of the Wiikwemkoong Unceded Territories. The place was as moving as it was breathtaking, overlooking Manitowaning Bay and the sites of the first gatherings between the native inhabitants of the island and the representatives of the Crown who came to ask to share the land.

After warning that some of the terms he would use might upset some listeners (but were necessary for historical context), Mr. Rivers then gave a 40-minute lecture on the history of Odawa Mniss (“the house of the Odawa the community’s original name used by its pre-contact inhabitants) and the various treaties affecting Manitoulin, from the Treaty of Bond Head of 1836 in which Manitoulin and its surrounding islands were set aside as a “home for man Rouge” to the controversial 1862 Treaty which sought to open the island to white settlers after the failure of the 1836 Treaty which sought to encourage Indigenous peoples from across the North to settle in Manitoulin.

The deception involved in the 1862 treaty has remained infamous, if not resolved, for before the ink had even dried on the parchment – ​​a fact well documented in historical records.

The tour then continued to the ruins of the former Jesuit residence whose austere walls still tower over Holy Cross Mission Church, a vivid reminder of the early days of the residential school system.

Those on the tour discover another location behind these ruins, now heavily overgrown and hidden from view by vegetation, the site of the original girls’ school and the now-defunct location of the corresponding boys’ school located further down the slopes of the hill leading to the bay.

These early Wiikwemkong boarding schools were, prior to 1920, moved to the mouth of the Spanish River on the north bank of the Like Huron North Channel.

Mr. Rivers spoke of the sometimes difficult relationship between the Jesuits and the larger Catholic Church as a whole, and of the critical role that the Jesuits living in Wiikwemkoong in 1862 played in explaining the shortcomings of the 1862 treaty, going on to explain how the Church and state came together to impose the residential school system on Indigenous communities.

After visiting the ruins, the tour bus descended to shore where Mr. Rivers told the story of the “Manitoulin Incident”, an infamous incident involving fishing rights and the death and mistreatment of aboriginal rights, freedoms and sovereignty reflected in the newspapers. around the world. It was an incident that would have disastrous consequences for the enforcement of Aboriginal rights, because it was in the aftermath of the legal battle that followed the Manitoulin incident that the Indian Act came into effect – a law which denied Indigenous peoples the right to hire a lawyer, preventing the settlement of land claims issues even to this day.

The Manitoulin incident involved disputes between native landowners and French and English Canadian fishermen who were fishing illegally in the area, which ultimately resulted in the landing of special constables at Wiikwemkoong and an ensuing scuffle that sent the Constables and Crown Agent William Gibbard pack their bags. Mr Gibbard later died in suspicious circumstances while traveling on the same ship as two of the supporters of the original conflict, Chief Ozawanimiki, the chief fisherman from Wiikwemkoong and a prominent Jesuit priest from Wiikwemkoong. Mr. Gibbard’s body eventually washed up on shore near Little Current. Despite a total lack of evidence, the priest and the Ozawanimiki chief were arrested and put in irons for murder.

Both were later exonerated and Mr Gibbard’s death remains a mystery to this day.

“There’s so much history that I don’t have time to get into on this tour,” Mr. Rivers apologized at the end of the tour, despite his three-hour run.

The tour was both informative and enjoyable given the outstanding visual backdrop of the stopping places. To book a Wiikwemkoong Reconciliation Tour, contact Wiikwemkoong Tourism online at Wiikwemkoong.ca/tours, or call 705-859-3477 or email info@wiikwemkoong.ca.