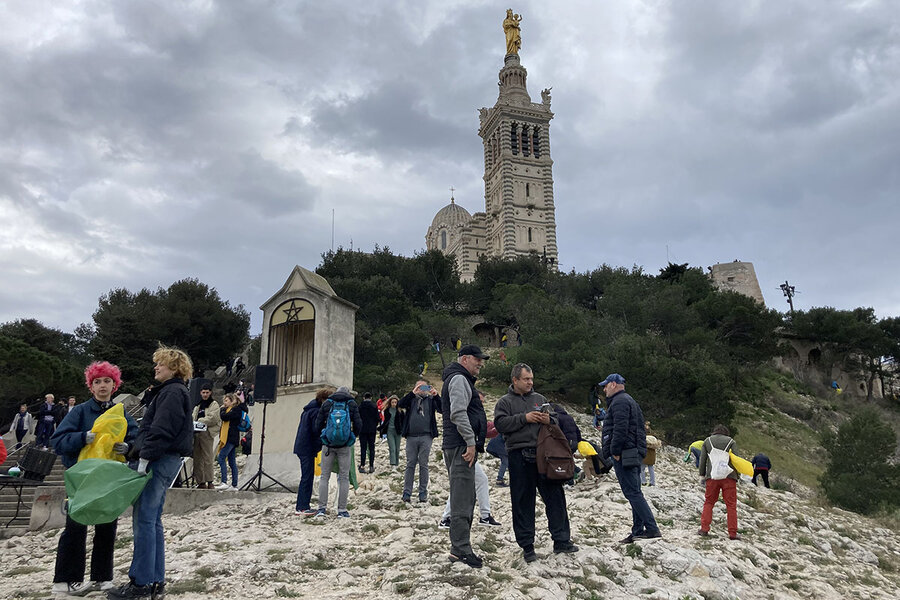 Volunteers step in to clean up the rubbish in Marseille, the dirtiest city in France

Garbage collectors are back at work in Marseille, France’s second city, after staging a strike in January over working hours. Trash collection is a bargaining chip for union workers who once dumped tons of debris on the steps of City Hall during a dispute. Uncollected garbage often ends up on the beaches, much to the dismay of local residents.

Today, the ongoing threat of strikes and trash-filled streets has spurred individuals and organizations into action, fueling a movement of volunteers in a port city that is unofficially known as ‘the dirtiest city in France’. “. There is a feeling that environmental issues have become too urgent to ignore, and that if the city cannot clean up, citizens must step in.

Why we wrote this

A spirit of volunteerism built on civic pride has the potential to overturn the reputation of France’s second largest city as the dirtiest.

Environmental aid groups in the area are reporting an explosion of volunteers joining the cleanup effort. At the end of last month’s strike, nonprofits teamed up with City Hall to set up distribution points around the city to hand out gloves and trash bags to volunteers who helped remove the street garbage.

“The people of Marseille love our city, but sometimes we don’t treat it very well,” explains Eric Akopian, co-founder of Clean My Calanques, a non-profit environmental association. “We try to use that pride to help people see that they can make a difference. It’s not about yelling at them or giving them a moral lesson, but about showing them that they have the power to change things.

As trash bags dangle from their gloved hands, Maïa and Nour wade through the bushes on the steep, rocky slopes below Notre Dame de la Garde, a glittering church perched in France’s second-largest city. They pick up the usual — beer bottles, face masks — as well as unexpected finds, like a mouse-shaped gray cat bed.

High school students volunteered to collect rubbish after Marseille’s garbage collectors’ strike in January, a stoppage that lasted more than two weeks and left more than 3,000 tonnes of rubbish on sidewalks and streets; some have ended up littering its Mediterranean beaches.

“I was very worried,” says Nour. “It was so dirty and when it rained it was horrible.”

Why we wrote this

A spirit of volunteerism built on civic pride has the potential to overturn the reputation of France’s second largest city as the dirtiest.

“I know the unions were on strike for a good reason, but there are huge environmental consequences,” says Maïa, who wears wide-rimmed glasses and an oversized puffer jacket. “Everything ends in the sea.”

The garbage collectors finally reached an agreement with the municipality on February 2 on working hours. But Marseille’s garbage problems are far from over. Trash collection has long been a bargaining chip for unions – cleaners at the city’s train station recently stopped emptying bins amid a labor dispute – and many believe Marseille deserves its unofficial title of “the dirtiest city in France”.

At the same time, general frustration and exasperation about waste is building. There is a feeling that environmental issues have become too pressing to ignore and that if the city cannot clean up its act, citizens must step in. From collective efforts to individual actions, residents like Nour and Maïa are working to beautify their city, one waste at a time. This surge in volunteerism has the potential to tarnish Marseille’s reputation for filth and boost local pride.

“The people of Marseille love our city, but sometimes we don’t treat it very well,” explains Eric Akopian, co-founder of Clean My Calanques, a non-profit environmental association. “We try to use that pride to help people see that they can make a difference. It’s not about yelling at them or giving them a moral lesson, but about showing them that they have the power to change things.

Founded by the Phoenicians around 600 BC, Marseille has long been a hub of trade and immigration, and a multicultural melting pot. Her brutal image inspired the 1971 crime drama “The French Connection” and fueled a folkloric vision of a mob-run city, though she also inspires a strong sense of identity and attachment among the few 1 .6 million inhabitants of its metropolis. region.

While the general strike of garbage collectors in Marseille ended on February 2, garbage remains a problem. Cleaning crews at the city’s main train station went on a separate strike in mid-February, leaving bins like this overflowing.

“We live well on less here. We enjoy the simple pleasures in life,” says Marilou Mathieu, a retired socio-anthropologist who lived for many years in Africa before returning home. She was visiting the city’s famous fish market on the Old Port on a recent Sunday. “We can hear all languages, see people from everywhere and feel free. I love my city.”

Part of Marseille’s gravity comes from its problem with litter and rubbish collection: garbage collectors have used strikes to air their grievances for decades, including in 1986 when they spectacularly dumped dozens of tonnes of debris on the steps of the town hall. Since 2014, they have organized almost annual walkouts.

However, locals have become less sympathetic to their cause as concerns about the environmental impact of the strikes grow.

“They have their reasons for striking, but maybe they need to do things differently, instead of creating an additional health and health crisis,” says Natacha Grimaldi, spokesperson for 1 Waste Per Day, l association that organized the cleaning of Notre Dame de Paris. the guard. “Because of this, we have an explosion of rats, bed bugs and cockroaches. It’s a very tense situation. »

But he is the good sea – the Mediterranean – which the inhabitants are most keen to protect. When the mistral kicking – generating winds of over 60 mph – rubbish is strewn along beaches and hillside walking paths, and in the water. According to surveillance flight data from local authorities, previous strikes resulted in uncollected debris sinking to the seabed.

“We need to focus on the litter problem at sea, of course, but it’s just as important to clean up on land,” says Marie Dalbouse, regional manager of another environmental nonprofit, Wings of the Ocean. “By the time plastic and other waste ends up in the sea, it’s already too late.”

Local groups say they are encouraged by the involvement of French youth in climate and environmental advocacy, since Swedish activist Greta Thunberg began leading the Europe-based youth movement Fridays for Future.

Clean My Calanques is one of many groups that visit schools to educate young people about recycling and the effects of plastic pollution. Last year, he released a rap video featuring local hip-hop artists to reach students who aren’t necessarily interested in environmental issues.

“When we enter the classroom, the children already know who we are. They’ll say they saw us on YouTube with their idols,” says Akopian. “The bond between us comes much easier after that. … The teachers will tell me later that the children ask them to clean the playground during recess.

A pedestrian walks past a pile of burnt waste after an eight-day strike by garbage collectors in Marseille, France, October 6, 2021.

Environmental aid groups in the area are reporting an explosion in the number of volunteers joining the cleanup efforts – around 1,000 took part in two events held in February. As last month’s strike came to an end, nonprofits teamed up with City Hall to set up distribution points around the city to hand out gloves and trash bags to volunteers who helped remove the street garbage.

The city’s tourist office is also stepping up to the plate: in 2020 it launched a sustainable development program which labels eco-responsible hotels and promotes eco-management of events. “We have even changed our consumption habits within [our office] whether it’s electricity or water,” explains Estelle Le Bris, head of tourism monitoring and sustainability at the Marseille tourist office. “We want to set a good example.

Despite Marseille’s anecdotal awards as the dirtiest city in the country, it has also received several official awards, such as European Capital of Culture from the European Commission in 2013. Last September, it became the first French city to host the IUCN World Conservation Congress, thanks to its rich natural resources.

Get stories that
empower and uplift Daily.

Marseilles love to complain about the infuriating quality of their city, but retailers run a thriving business selling t-shirts and hats branded “Proud to be Marseille” – a common refrain here – to residents and visitors alike. .

“Marseille is a rebellious city, a city of excess, and garbage is unfortunately one of our particularities”, explains Rolland Viti, a resident who participated in the cleaning in February. “We have those who are not civic, but fortunately we also have those who care about the public good. And they try to correct bad behavior.