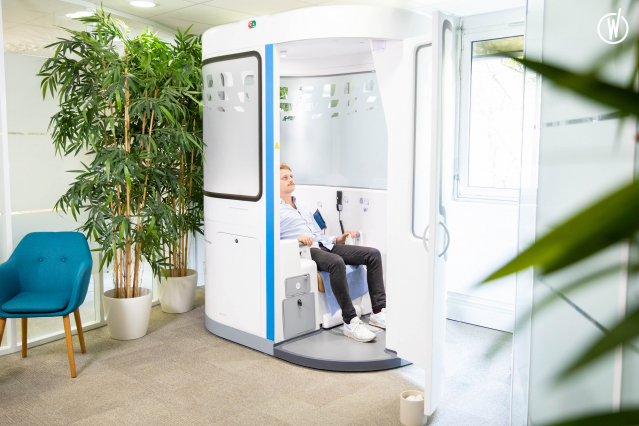 Providers of “health booths” – small booths with screens, speakers and basic medical equipment such as stethoscopes and blood pressure cuffs – are reporting growing interest as more patients opt for appointments. virtual you at the general practitioner.

Booths offer digital contact with a doctor, known as telemedecine.

The doctor explains the procedures for recording vital signs and, once diagnosed, can write a prescription which is printed in the cabin for the patient.

Medical appointments via the internet or by telephone increased sharply in France in 2020, driven in large part by the pandemic.

An official report from the regulator in charge of digital health issues, the Digital Health Agency (ANS), indicates that there were 400,000 consultations in the whole of 2019, compared to one million per week at the height of the closures. .

Read more: Complementary health insurance in France: what it is and how it works

This was helped by a government decision to charge teleconsultations at the same rate as normal GP visits via the vital card system.

The French company H4D, which claims to be the world leader in the supply of health cabins, started developing cabins in 2008.

Among the company’s customers is John Billard, mayor of Favril in Eure-et-Loir, who installed a cabin there in October 2019.

The village, which has around 350 inhabitants, also allows other patients in the region to use the cabin.

The district has only one doctor’s office and it often takes days to get an appointment.

“The idea was to see how things were for two years, but of course Covid changed everything. Now with the situation a bit calmer and with the government using the cabin with a vital card easy, we usually have between five and seven people a week,” Mr. Billard said.

The Favril hut cost around €100,000 to set up (the room it is in was provided free of charge by the municipality), and the operating costs are around €1,000 per month.

The mayor’s secretary, a volunteer or a member of the municipal Council manages appointments and helps people settle in. The actual consultation, including taking blood pressure and pulse, is carried out by the patient alone, under the direction of a doctor (usually based in a call center in Paris or Brittany).

Read more: New online health space: what will change for residents in France

Mr Billard says he often gets questions about the booth from other mayors who worry about the difficulties in attracting doctors to their townships.

The report notes that some doctors do not bother with specialized software and instead use phones or platforms such as Skype or Facetime.

There have been no reports of hacked consultations.

Meanwhile, an experience remote monitoring (remote monitoring) where patients use devices to send readings like blood pressure and glucose levels to doctors over the internet is extended.

It has been tested since 2018 for patients with diabetes, heart, kidney and lung problems, and to monitor people with pacemakers.

The extension of a few months will avoid a lag between the end of the trial and the implementation of the general reimbursement of remote monitoring by social security later in 2022.

The government has allocated 600 million euros to develop digital tools in medicine, and another result could soon be the introduction of a secure messaging service, so that x-rays, scans and letters to specialists can be automatically sent to physicians, instead of the current system where patients bring their own medical records to appointments.

10 million in France benefit from free glasses and dental care

French hospitals will set a flat rate of €19.61 for A&E care from January 1

The United States has so far admitted nearly 700 Ukrainian refugees

Armenia – Jean-Baptiste Lemoyne chairs the meeting on Franco-Armenian ambitions on the occasion of the 30th anniversary of the establishment of our diplomatic relations (Paris, March 09, 2022)