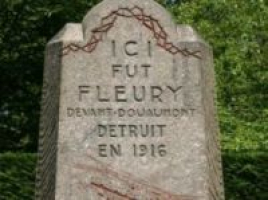 Villages that died for France during the First World War

TODAY, Armistice Day, let’s look at the six French villages reduced to ruins during World War I and never rebuilt, and are today called “the villages that died for France”.

These villages, Beaumont-en-Verdunois, Bezonvaux, CumiÃ¨res-le-Mort-Homme, Fleury-devant-Douaumont; Haumont-prÃ¨s-Samogneux and Louvemont-CÃ´te-du-Poivre, all located in the Meuse department, were destroyed during the Battle of Verdun, which raged from February 21 to December 18, 1916, claiming the lives of approximately 70,000 soldiers per month.

Local residents were evacuated at the start of the battle, but when they returned, nothing remained standing.

There were no trees, hedges, gardens, fields, nothing. The churches, barns and houses had completely disappeared.

The earth was so turned into mounds and burrows that it was impossible to know where the buildings and streets were.

There was nothing but heavily polluted mud in all directions, and underneath was so much unexploded ordnance that reconstruction was impossible.

In 1919, the government bought the land and decided that the six villages were to become monuments to the sacrifices made during the Great war.

Each municipality would have a mayor and two councilors. Each would retain its postal code and a legal and administrative identity, even if none of them would ever be inhabited or rebuilt again.

Each would have a war memorial, and a small chapel built on or near the ruins of their church, each village would be referred to as “death for france“.

Today, the site of each village is covered with grass and trees, and each has a budget of around â‚¬ 22,000, to maintain signs and memorials, mow lawns, etc. .

The earth is still settling, always on the move, and every year more and more relics of the battle rise to the surface of the ground, including the corpses of soldiers on both sides. (They are all re-buried as Unknown Soldiers.)

These weren’t the only villages destroyed in WWI, and countless more have vanished in the same way.

Some were rebuilt in different places, but many were simply abandoned and the land annexed by neighboring municipalities. These forgotten villages and communes have even officially lost their name.

How the French municipalities near Geneva fight against residence fraud