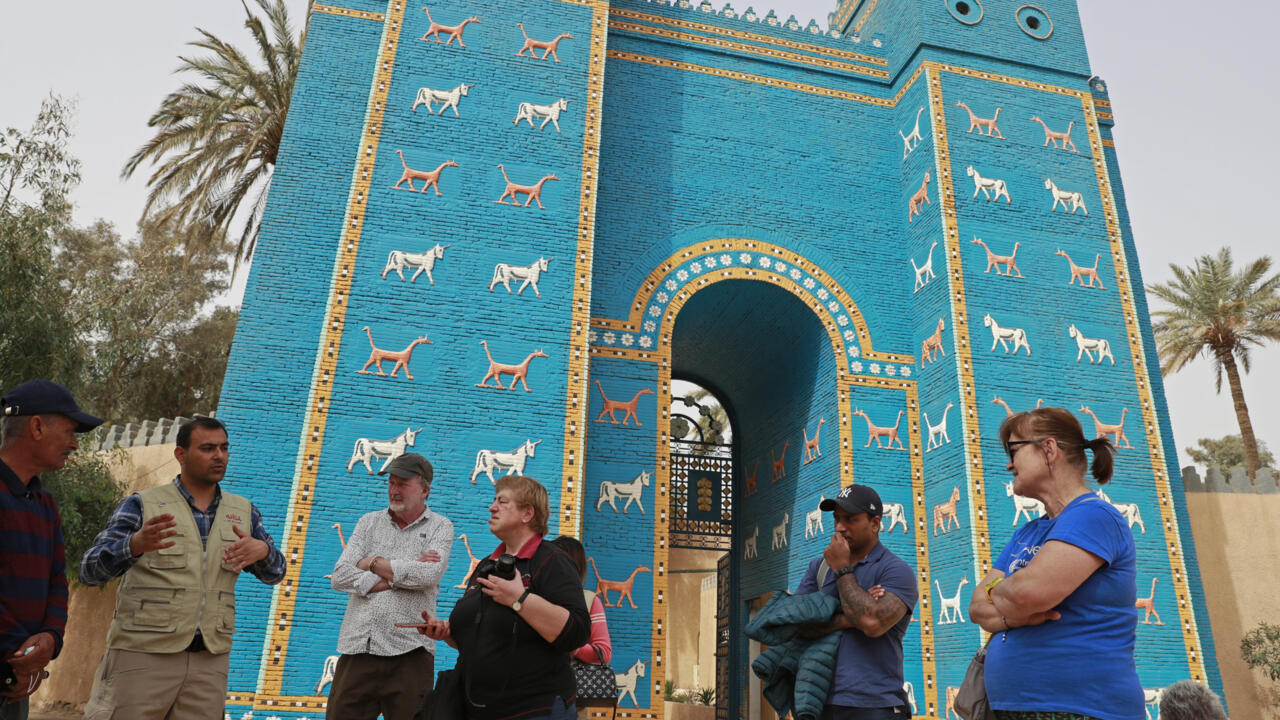 Hilla (Iraq) (AFP) – An American tourist poses for a vacation snap in Iraq, outside the blue brick Ishtar Gate which was rebuilt on the ancient site of Babylon under dictator Saddam Hussein.

Most foreigners here since Saddam’s ousting in a US-led invasion in 2003 have worn military fatigues and firearms – but more recently there has been a trickle of traveling pioneers with camera.

“This is where civilization began,” said the passionate globetrotter with some 40 countries to her credit. “I think too few people understand how important this region is.”

Most Western governments still issue travel warnings for all or parts of Iraq, highlighting the risks of kidnappings, jihadist bombings and unexploded ordnance from multiple wars.

But for some explorers unafraid of the bizarre military roadblock, Iraq is a hot new destination with multiple World Heritage Sites slowly reopening to the world.

Retirees and YouTubers, on package tours or backpacks, brave Iraq’s still-basic tourist infrastructure to visit ancient sites that rival those of Egypt, Syria and Jordan.

Whether in Baghdad or Mosul, the northern city that was a stronghold of the jihadists, we see them wandering in streets still marked by years of conflict.

Blogs and vlogs proliferated with names such as “American in Baghdad, Iraq”, “Two Germans alone in Iraq” and “Exploring Baghdad – how dangerous is it?”

The tourism mini-boom has accelerated since Iraq began granting visas on arrival to dozens of nationalities a year ago.

Ovalle, along with 14 other tourists, said she was happy to take part in a trip organized by a travel agency that offers cultural, sports and adventure trips.

“The first thing I noticed was the warmth, generosity and kindness of the Iraqi people,” she said. “They smile, they welcome you, they are very polite.”

In Babylon, more than 4,000 years old, weeds grow among the old bricks and rubbish litters the ground. Not so long ago, a nearby base housed US and Polish coalition troops.

“I think everyone is hesitant, especially coming from the United States,” said another visitor, 35-year-old New Yorker Justin Gonzales.

“If you go to our government’s website, they have a travel warning saying, ‘Do not travel to Iraq, it’s dangerous, you can get kidnapped, there’s often violence.’

Last year, Iraq attracted 107,000 tourists, including from Britain, France, the United States, Turkey and Norway. That was more than three times the 30,000 in 2020, according to data from the Tourism Authority.

Besides tourists, hundreds of thousands of religious pilgrims – particularly Shia Muslims, mostly from Iran – flock to the shrine cities of Karbala and Najaf, south of Baghdad, each year.

Elsewhere in Iraq, on the other hand, “we need infrastructure, private investment to have hotels, buses”, explains the boss of the Bil Weekend agency, Ali al-Makhzoumi, who has 30 to 40 clients per month.

There has been progress.

Baghdad’s National Museum reopened earlier in March after three years of closure, and the city’s famous booksellers’ street, Al-Mutanabi, got a makeover in December.

Ur, Abraham’s birthplace, is attracting more Westerners following a high-profile visit by Pope Francis to Iraq in 2021.

But industry pioneers want to do more, including Aya Salih, who runs the Safraty travel agency with her husband.

The government “has allowed visas on arrival, but everything else is still complicated,” she said. “Half the trip is wasted at roadblocks even though we have the necessary permits.”

Some visitors like the more daring and authentic travel experience.

“I like going to places that aren’t very touristy yet,” said Emma Witters, 54, who has more than 70,000 subscribers on her YouTube channel.

After so much war and isolation, she says, “you would think they would be unhappy, miserable people. But they are so happy to see people and strangers, they are so generous.”

The West African bloc maintains its sanctions against Mali