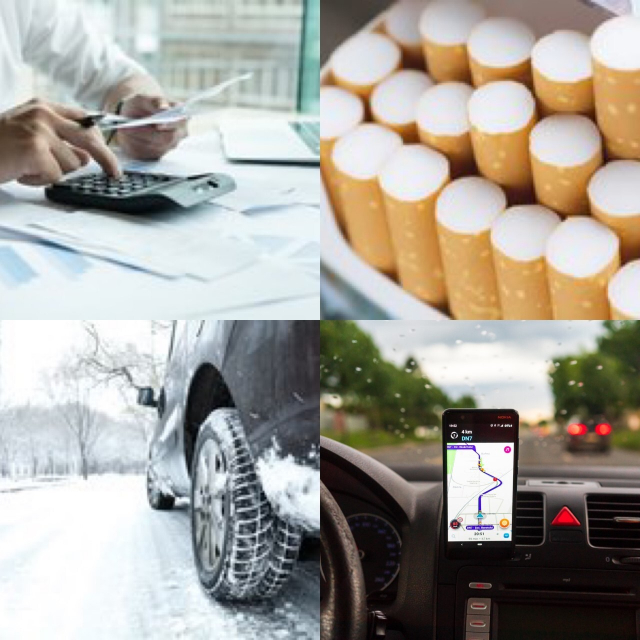 Ten changes for residents in France from November 2021

The coming month will be marked by TV royalties, slight modifications to certain pensions and the launch of Tobacco Free Month, making November the best month to quit smoking among others. We recap the changes.

A phantom increase in gas prices

Regulated gas electricity tariffs in France should in theory have increased by 15% in November, after rising 12.6% in October.

However, the government announced on October 1 that it would freeze regulated tariffs until April 2022, when prices are expected to drop.

Read more: Gas, electricity, petrol: see how your bills are increasing in France

This means that there will be no immediate increase for the nearly five million people who are either on a regulated tariff or whose bills are indexed to this tariff set by the government.

However, the freeze means these households are paying more than they usually would in the spring to allow gas suppliers to recoup their costs.

Housing tax is gradually phased out for main residences and only 20% of the richest residences will have to pay it this time. It remains entirely for second homes.

Read more: Who still has to pay housing tax in France and until when?

These 7.2 million wealthy households who still pay the tax will benefit this year from a 30% reduction, a saving of â‚¬ 363 on average. In 2022, the reduction will be 65%, and by 2023 no primary residence will have to pay the tax.

Read more: French TV license: who is exempt from paying the â‚¬ 138 this year?

The TV license fee is â‚¬ 138 this year for residents of mainland France.

Housing tax and TV license invoices must be paid by November 15 if by direct debit or check, or November 20 if you pay online through the government portal.

If you haven’t received your bill yet, that means you have until mid-December to pay (your bill will also show this).

Opening of US borders to people from the EU

The United States will open its borders to fully vaccinated travelers from countries such as the Schengen zone and the United Kingdom on November 8.

Passengers will need to have proof of being vaccinated with a vaccine approved by the Food and Drug Administration or the World Health Organization, at least two weeks prior to travel.

Read more: Eight updates for air, ferry and train travel to and from France

Those under the age of 18 and people with certain medical conditions will be exempt from vaccination requirements, but will still be required to provide a PCR test or negative lateral flow test performed within three days of travel if they are more than two years old. years, just like vaccinated adults.

A change in the price of cigarettes

In November, there will be a slight increase in the price of some cigarettes while others become cheaper.

A new French law gives the Ministry of the Interior and individual prefectures the power to ban warning messages indicating the presence of certain police traps on certain roads via satellite navigation applications such as Waze, TomTom or Coyote.

It will come into effect on November 1 and will specifically target alerts on operations, including alcohol and drug checks, as well as searches during terrorist attacks and kidnappings.

Alert messages will remain invisible for two hours, or up to 12 hours in the case of more serious events such as kidnappings.

The temporary ban on police check warnings will apply on departmental and municipal roads and will extend 10 km around the location of the trap in rural areas and 2 km in towns.

Users of the application will therefore be free to continue to warn other drivers of speed cameras.

In order to hide the alerts within the satellite navigation services, the police will have to contact the application operators. Drivers will not be penalized for posting an alert.

Read more: The modification of the law on satellite navigation makes police checks more difficult to avoid in France

Snow tires will be compulsory for vehicles in several mountain municipalities in France from November 1st.

The requirement will remain in effect between November 1 and March 31 of each year and applies to all cars, vans, buses and heavy goods vehicles, even if they are only passing through the affected area.

However, the government has said that drivers found without them will not be punished this year.

The new rule, dubbed the â€œmountain lawâ€, will require that vehicles – including motorhomes – circulating in the affected mountain communities either:

Chains or socks should be suitable for at least two ‘drive’ wheels (such as the rear wheels of a rear-wheel drive vehicle), and the driver should be able to fit them if and when necessary.

If used, winter tires must be fitted to all four wheels and must be marked with either “M + S”, “MS” or “M&S”, and / or the “snowy mountain” logo to be valid.

Vehicles with studded tires are not affected by the requirement.

Read more: Where in France will snow tires be compulsory under the new November law?

More information is available on the French government website.

November will see the sixth edition of Mois sans tabac (A Month Without Smoking), the month when thousands of people across France are trying to quit smoking.

This year, 71,600 people have already registered on the online platform, where participants can access a “consultation with a professional” who can guide them through the quitting process and increase their chances of success by 70%, according to Public health France. .

Thanks to Tobacco Free Month, it is also possible to order an â€œanti-smoking kitâ€, with daily challenges and tips.

The French National Health Agency also states that avoiding smoking for 30 days makes you five times more likely to quit for good, because after a month, the withdrawal symptoms start to subside.

The number of smokers in France decreased between 2014 and 2019, but stabilized in 2020, increasing among the most disadvantaged communities.

Pension increases are lower than inflation

Thirteen million retirees affiliated to the Agirc-Arrco supplementary pension scheme will see their pensions increase by 1% in November.

This is less than the inflation rate, which is forecast at 1.5% this year by the French institute for national statistics, INSEE.

The 1% increase comes after pension plans recorded a deficit of â‚¬ 4 billion in 2020, due to the Covid pandemic.

ValÃ©rie Batigne, president of the retirement consultancy firm Sapiendo, estimates that over the past 10 years, the value of pensions has increased to less than half the rate of inflation. On average, this translated into a 4% shortfall in private sector workers’ pension plans.

Between November 1 and March 31, tenants cannot be evicted from their accommodation, unless the accommodation is unsanitary, occupied by squatters, or if a tenant is relocated to an apartment or house better suited to their needs.

Suppliers are also prohibited from cutting off electricity or gas to a household during this period.

Landlords can initiate legal eviction proceedings during this time, but the tenant will not have to vacate the property until the end of winter. Any owner who tries to evict a tenant himself faces three years in prison and a â‚¬ 30,000 fine.

The government can decide to extend the length of the deportation ban, as it did in 2020 and 2021.

An increase in agricultural pensions

The minimum amounts of agricultural pensions are raised from 75% to 85% of the agricultural minimum wage. This equates to â‚¬ 1,035.

This only applies to the farm manager, provided he is already claiming his pension (s) in November 2021.

Farmers who are still working and partners who co-manage the farm are not affected by this.

Finally, there are two public holidays which take place in November in France.

Why do my electricity bills in France keep increasing despite the competition?

Movements to control the movement of refugees in Europe – archive, 1946 | Refugees