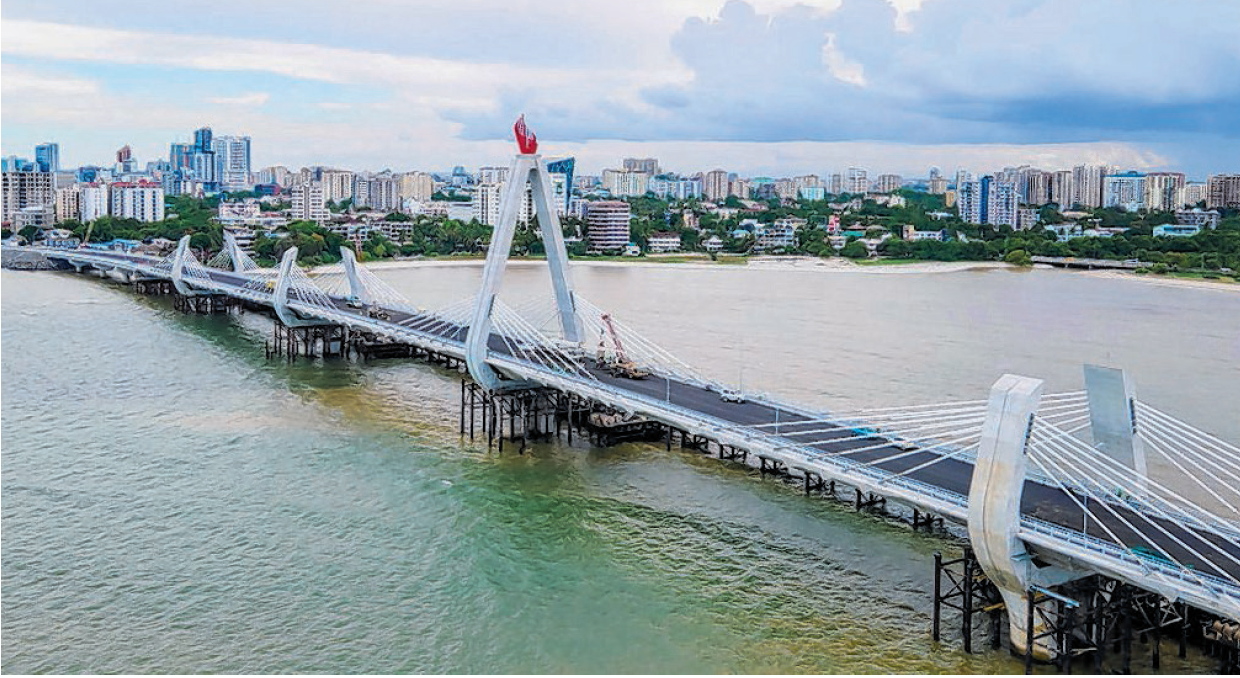 The city of Dar es Salaam has taken a step closer to being a major metropolis in East Africa, thanks to the magnificent monument of the Tanzanite Bridge, which shines above the Indian Ocean.

The 670 meter high and 1.03 kilometer long state-of-the-art bridge was built by South Korean GS Engineering along the coast from Coco Beach to Oysterbay stretching to the Aga Khan Hospital.

The tanzanite bridge is said to be lighter due to the mixture of girder and cable-stayed bridge technologies.

With a capacity of 180 tonnage, the bridge is billed to carry 55,000 vehicles or thereabouts per day.

Minister of Public Works and Construction Prof. Makame Mbarawa said no tolls will be imposed for using the bridge which is open to all motorists, thanks to the government of the United Republic of Tanzania for this decision.

The project which started in 2018 is jointly funded by the Tanzanian government and the South Korean government, has become the symbol of the good friendship and cooperation between these two countries.

There is a Swahili saying that goes: “Ukiona vyaelea jua vimeundwa” (If you see ships afloat, know that they were built). and the splendor of Dar es Salaam.

Built over the ocean using the cable-stayed design, it closely follows in the footsteps of its more illustrious cousins ​​such as the Millau Viaduct in France, which is the tallest bridge in the world.

The bridge lights at sunset not only help prevent motorists from crashing, but also provide panoramic views at night, providing a fantastic escape for tens of thousands of townspeople and visitors.

It is surely fair to endorse the superlative bridge as an identity of the country’s busiest city, Dar es Salaam.

The features of a four-lane bridge are not only attractive to the eyes, but also make it easier for cars to navigate and thus avoid traffic jams.

Pedestrian safety on the bridge is well taken care of as a special walking area is not only provided but also protected from both areas.

There are two walkways that prevent possible accidents and the areas are also guarded to keep pedestrians away from cars.

The Tanzanite Bridge has become a major attraction and a place of joy for the people of Dar es Salaam and even some Tanzanians from other regions wish to come to Dar es Salaam to see this bridge for themselves. The people of Dar es Salaam have made it their main point of attraction, some use it to take photos for their souvenirs, some as part of building their health by walking and running even the top leaders of big institutions in the country like the Director General of CRDB, Abdulmajid Nsekela was among the few people who were stunned by the beauty of the bridge as he shared his first experience as he took to Twitter to post the photo of him jogging on the bridge with parts of its caption saying, “During my physical exercise this morning, I walked across Tanzanite Bridge, congratulations to President Samia Suluhu for building this beautiful, modern, world-class bridge.

A lady was interviewed; she said: “This project is a very good thing because now workers and businessmen will arrive on time at work and return on time at home.

As the bridge becomes hypnotic and a center of amusement, Mr. Tarimo Hamis, a resident and transporter of Masaki, nodded twice to the country’s attractive asset and notifies that he will help reduce the riddle of the traffic from downtown to Masaki almost by one half, rental cost of transportation from downtown to Masaki or any related distance will be reduced.

If the bridge is used properly, a large number of intercity motorists should reduce travel time during peak hours. It is a farewell to the traffic jam stretching from the Palm Beach to Saint Peters stretch to all road users who previously had to take the Ali Hassan Mwinyi road to get to town.

Nevertheless, the bridge is expected to improve the road network linking many parts of the city of Dar es Salaam.

Since no one would like to wake up to the breath of fresh coconut coast air while atop the bridge gazing at the Dar skyline, the infrastructure continues to serve as a new tourist attraction of the country, especially Dar es Salaam.

Based on the above score, city dwellers and upcountry dwellers alike flock to take pride in the bridge to best experience the memories with photos. However, its aesthetic is captivating enough to persuade an influx of foreigners across East and Central Africa.

The bridge was built not only to solve the traffic conundrum by reducing the travel time from the city center, but also to solve the long-standing problem of flooding, which usually affects the Msimbazi Valley during the rainy season. .

Regarding the commercial purpose, Dar es Salaam is the central economic center of the country, which required state-of-the-art bridges to facilitate the transit of goods and the free movement of traders across the road. , since Dodoma is now a government city, just like Washington is in the United States of America. From this perspective, merchants expect higher growth and added value from their businesses throughout.

According to the sources, the bridge is staged to transform the metropolis of Dar es Salaam into a leading commercial city in the region.

According to experts, the bridge can last up to 100 years if used correctly, a rare feature of some of our infrastructure in the country, making it a much more modern facility.

With the bridge built a few kilometers from the port of Dar es Salaam which significantly serves as a gateway for landlocked neighboring countries to ship their goods across the sea, the state-of-the-art bridge plays the role port like many other foreign countries and local traders will depend on it for the transit of their goods.

I have a dream

Over the next 30 years, Dar es Salaam will be a commercial city developed like New York in the United States of America (USA), not only for its natural resources and locations, but also for its state-of-the-art bridges, flyovers and ports.

Tanzania will be a favorable place for investors, a country of high technology industries and a place for business in Africa.

It will also be the most developed country in Africa.