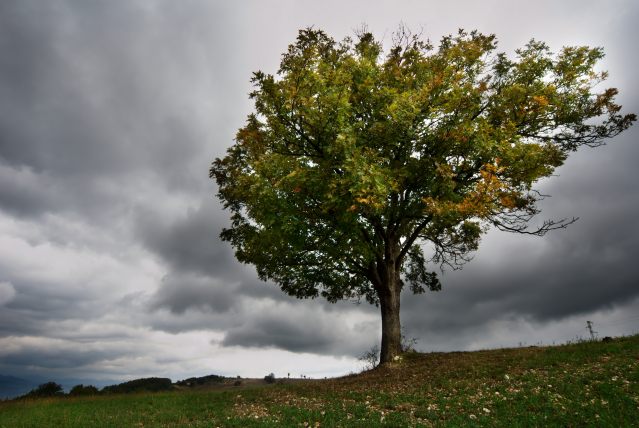 Much of the northern half of France has been affected in the past 24 hours by Storm Aurora, which brought strong winds sweeping from west to east.

This first storm of the autumn season started yesterday afternoon around Brittany and Normandy before moving overnight towards Ile-de-France then towards the Grand Est region in the early hours of this morning (21 October).

It has seen 250,000 homes – mainly in Normandy – affected by power cuts and blocked hundreds of roads and railroads with fallen trees.

No injuries were reported.

Several departments have been placed on orange weather alert for “strong winds” by MÃ©tÃ©o France, but have now largely returned to green as the storm subsides.

Even before the storm arrived, the sea off the coast of Brittany was rough, with waves reaching several meters in height and pouring over the dikes.

As the evening progressed, the wind speed rose to 140 km / h in Plougonvelin (FinistÃ¨re).

In the town of PlozÃ©vet in southern FinistÃ¨re, a “mini tornado” raged over three kilometers, damaging trees, cars, electric cables and destroying a house under construction.

[DIRECT] #TempeteAurora : at the end of the afternoon, a #tornado touched the municipality of # PlozÃ©vet, in the south of # Finistere, tearing off roofs and many trees … (photos Audrey Monfort) @LCI pic.twitter.com/tJq6LCqkVq

Fortunately, no one was injured by the event, but the roof of the town hall was damaged and Mayor Gilles KÃ©rÃ©zÃ©on said he had “never” seen winds of “such brutality”.

A similar incident occurred in KernasclÃ©den (Morbihan), leading MÃ©tÃ©o Bretagne to suggest that Brittany had in fact been hit by two tornadoes.

Between 4:00 p.m. and 8:00 p.m. yesterday, the Morbihan prefecture recorded 100 incidents in 61 municipalities, with 90 trees fallen across the roads and 194 firefighters deployed to remedy the situation.

The strong winds caused the suspension of the Norman rail network until 10:00 am. Branches that have fallen across the tracks always cause considerable disturbance.

Between 9:00 p.m. Wednesday and the early hours of this morning, the department’s firefighters had been called on 127 incidents.

These extreme weather conditions caused tree falls and power cuts in several towns in the department, with roofs damaged in towns such as Heuqueville and Octeville-sur-Mer, where the inhabitants of three houses had to be evacuated.

Firefighters and rescue teams were deployed to clear fallen trees across the roads of Le Havre and BrurÃ©e, while several residents of Agon-Coutainville had to be temporarily relocated after the wind blew 10 meters from their roofs. .

During the night, winds of 107 km / h were recorded at Roissy (Val d’Oise) and the top of the Eiffel Tower withstood gusts of up to 153 km / h. Extreme weather conditions continued to affect all of Ile-de-France this morning.

Traffic tracking service Sytadin recorded 387km of traffic jams in Ile-de-France at 08:00 this morning, against 200 for a normal Thursday.

The RER and Transilien trains are still disrupted due to fallen trees obstructing the tracks.

Hello, Alexandra to accompany you until 1 p.m. Traffic #RERB is disruption from St-RÃ©my-lÃ¨s-Chevreuse / Robinson to CDG 2 / Mitry-Claye Airport due to weather conditions

#TempeteAurora âš ï¸ This morning, the traffic is disturbed on the lines of the network #Transilien following the numerous falls of trees (photo – Line H). For more information see the application @IDFmobilites, https://t.co/mj23ybm3No or the site https://t.co/arZJxFCmUz. pic.twitter.com/fnCmmP4DIX

TER trains entering and leaving Paris are also affected by delays this morning. Passengers are advised to check which trains are running before starting their journey.

The departments of Grand Est Ardennes, Marne and Meuse were the last to be removed from MÃ©tÃ©o France’s orange alert to strong winds earlier this morning.

In the Bas-Rhin, firefighters and emergency services received 198 calls between 3 a.m. and 7 a.m. this morning, and a hundred firefighters are still deployed throughout Alsace.

At 7am, the wind is blowing at 95 km / h in Berg, 93 km / h in Waltenheim-sur-Zorn, 87 km / h in Entzheim and 86 km / h in SÃ©lestat. Table of max gusts below. #tempeteAurora Tree fall this morning at @strasbourg (c) Claude Didierjean pic.twitter.com/WVoTHlaCVd

In Alsace, some TER lines are suspended, while in Lorraine and Champagne-Ardenne all services are affected.

It is hoped that the problems affecting rail transport in the region will be resolved by 12 noon.

The Ardennes, the Marne and the Meuse on orange alert to strong winds

Public vote photo of the storm in Cannes, the best weather photo in the world

Are extreme weather alerts more and more frequent in France?