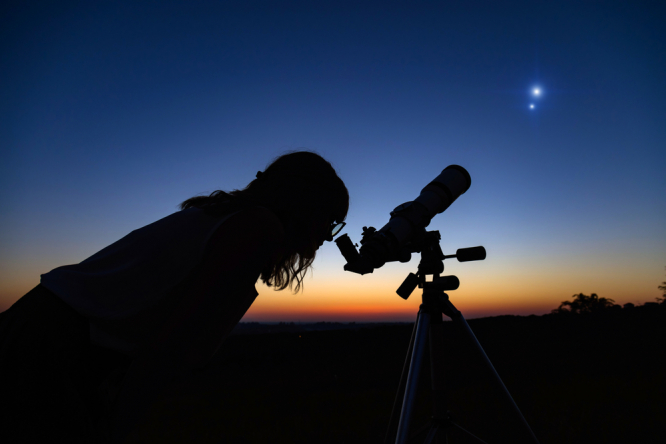 stargazing events across France this weekend

This weekend marks the 32nd edition of Nuits des étoiles, which begins tonight (August 5) and will continue until Sunday evening (August 7).

The event is organized by the French Astronomical Association (AFA) and offers 476 special stargazing sessions in 335 towns in France.

Star Nights allow astronomy enthusiasts to meet scientists to discover the sky above us through workshops and telescope observation sessions.

Using a telescope, it is possible to see Jupiter, Saturn and sometimes Uranus and Neptune, as well as the Moon and its craters, seas and mountains.

This year’s theme revolves around the idea of ​​exploration, “man’s return to the Moon and future quests to Mars”.

The AFA has created a map of all the different events taking place across the country.

For example, at Parc Montsouris in Paris, the association will install telescopes on the night of August 4 to 5 so that residents can observe the stars for free.

Similarly, in Lyon, the AFA will make telescopes available from 9:00 p.m. on August 5 in Villeurbanne, which the public can use free of charge.

Météo France is forecasting largely clear nights throughout the weekend, so conditions should be ideal for stargazing

While the majority of events take place in France, sessions are also organized each year in countries such as Belgium, Switzerland and Algeria.

The launch of the James Webb Space Telescope on December 25, 2021 – to replace the retired Hubble Telescope – has increased global interest in space exploration and may encourage more people to participate in Nights of the Stars events this year.

In early July, the first photograph taken by James Webb was unveiled by US President Joe Biden, showing the deepest, sharpest infrared image of the universe ever taken.

Previewed by @POTUS on July 11, it shows galaxies once invisible to us. The complete set of @NASAWebbThe first color images and data will be revealed on July 12: https://t.co/63zxpNDi4I pic.twitter.com/zAr7YoFZ8C

More recently, the telescope has captured images of the Cartwheel galaxy – which is 500 million light-years from Earth – the cosmic cliffs of the Carina Nebula and more.

What can I see in the night sky in August?

Les Nuits des étoiles falls in the best month of the year for stargazing in France, so even if you don’t attend any events this weekend, there will still be plenty of opportunities to see space shows in the skies above. above.

For example, the The Perseid meteor shower is expected to be visible until August 25, although its activity will peak on the night of August 12 this year.

This annual “shooting star” event is caused when Earth passes through the debris flow left by Comet Swift-Tuttle, dragging chunks of material crashing into the upper atmosphere at high speeds and illuminating the night sky.

The Perseids are so named because the meteors appear to originate from the constellation Perseus, which is located near one of the brightest star formations, Cassiopeia the Queen.

They are visible to the naked eye, and it is sometimes possible to see around 100 meteors per hour.

The next event will be the Full Sturgeon Super Moon on August 11: the last super moon of the year.

That night, the Moon will appear 7% larger and 14% brighter than a normal Moon.

The name “sturgeon” comes from the Algonquin Native American tribes, who noticed that it was easier to catch the fish at this time of year.

On August 14, Saturn will be opposite Earth to the Sun, and closest to us. It will therefore be easier to observe and should be visible through binoculars.

Another meteor shower, the Kappa Cygnids, will also be visible from tonight until August 25, peaking on August 17.

This spectacle is not as prolific as the Perseids, with only three meteors becoming visible each hour.

What’s coming? The week ahead in France

Why some French cities turn off their streetlights at night

Is a “closer Europe” a better Europe? – Democracy and society

How much water do household appliances consume?