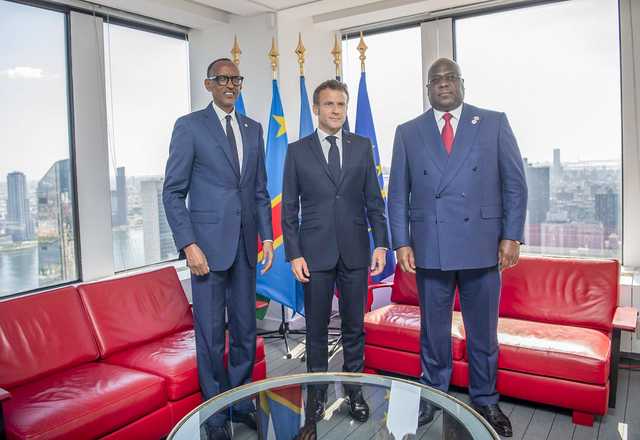 By The East African

Rwanda and the Democratic Republic of Congo agree that the M23 and other armed militias pose a major security threat and damage bilateral relations. However, the two countries prescribe different solutions to the problem.

This week in New York, Presidents Félix Tshisekedi of DR Congo and Paul Kagame of Rwanda met under the mediation of French President Emmanuel Macron. They agreed to resume talks on how to deal with the M23 threat.

“The two presidents agreed to act together to obtain, as soon as possible, the withdrawal of the M23 from all the occupied regions and the return of the displaced persons to their homes, with the support of the United Nations and its partners in the African Union, the East African Community and the Conference on the Great Lakes Region (ICGLR),” the DR Congo Presidency said in a statement.

According to the dispatch, President Kagame and President Tshisekedi “also agreed to intensify their long-term cooperation to fight against impunity and put an end to the action of armed groups in the Great Lakes region, including the Democratic Forces for the Liberation of Rwanda (FDLR) These efforts will take place within the framework of existing regional peace initiatives, including the Nairobi process.

Kigali did not release the “joint statement” but said the leaders had discussed solutions to the conflict in the eastern region of DR Congo.

The New York meeting, however, was preceded by harsh words for Rwanda by President Tshisekedi in a speech to the UN General Assembly on Tuesday.

He said Rwanda was undermining peace efforts in the DRC.

“Despite my goodwill for the search for peace, some neighbors have found no better way to thank us than to attack and support the armed groups that are ravaging eastern Congo,” he said. .

President Tshisekedi added: “In defiance of international law, [Rwanda] has again not only interfered in the DR Congo since March through direct incursions by its armed forces, but also occupied localities in the province of North Kivu by an armed terrorist group, the M23, to which it provides massive support in terms of equipment and in troops. ”

President Kagame retaliated a day later, noting that the insecurity situation in eastern DRC had exposed Rwanda to “cross-border attacks which are entirely preventable”.

“The blame game does not solve problems,” he said in his address to the UN General Assembly.

“There is an urgent need to find the political will to finally tackle the root cause of instability in eastern DR Congo. These challenges are not insurmountable and solutions can be found. It would ultimately be much less costly in terms of money and human lives,” President Kagame added.

Tensions have persisted, with officials from both governments saying East Africa that no progress has been made since the climax of hostilities earlier this year.

“There is no improvement in relations. DR Congo has insisted on Rwanda as a scapegoat for the insecurity in the east, even when there are so many rebel groups operating there,” said one. Rwandan official on condition of anonymity.

Kinshasa considers Rwanda as an aggressor state, particularly with the capture of the town of Bunagana by the M23 rebels. Rwanda sees the DRC as a supporter of the former masterminds of the genocide, the FDLR group, which is hiding in DR Congo.

Since June, M23 rebels have controlled the town of Bunagana in North Kivu province which borders Uganda.

The M23 advance resulted in the suspension of RwandAir flights to the DRC, as well as the firing of rockets into Rwandan territory by the Congolese army.

This week, UN Secretary-General Antonio Guterres told France 24 that the only way to achieve peace is through “serious” talks between DR Congo, Uganda and Rwanda.

“We need to have a common perspective to avoid this situation which always takes us backwards when we progress.

The DRC and Rwanda had opened dialogue within the framework of a Mixed Commission. But the two countries had only one meeting, at the end of July. Previously, the Mixed Commission had not met for 10 years.

After the resurgence of the M23 rebels, the DRC this year accused Rwanda of supporting the Congolese rebels militarily and in the supply of arms.