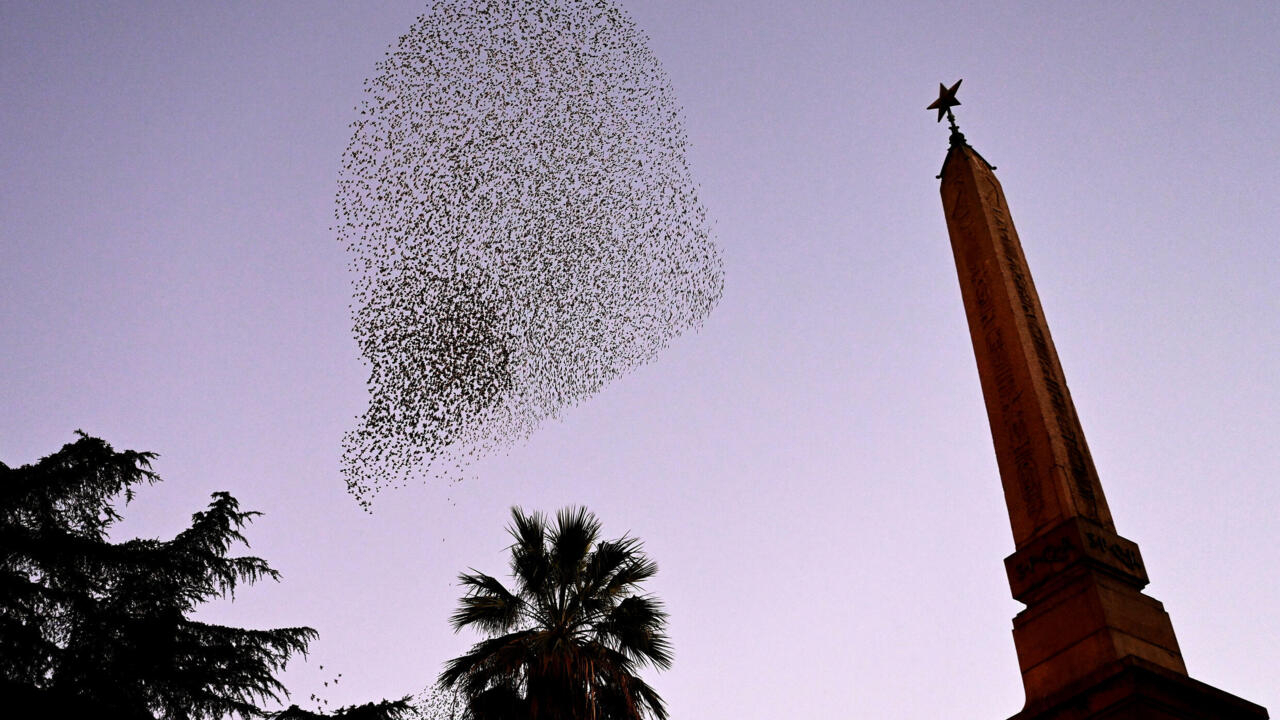 Rome drives away its starlings

Roma (AFP) – As the sun sets over central Rome, five figures in white overalls move under the trees. They wave loudspeakers emitting a mixture of high-pitched cries, and the birds soar through the air.

Every winter, the sky above the Italian capital is filled with the mesmerizing sight of thousands of starlings swooping and diving in unison.

But when they stop to rest on trees, their droppings cover the sidewalks and cars below, prompting city officials to try to scare them away every year.

“We act on their fear reflex using their own alarm call,” said Marianna Di Santo, dressed head to toe in white protective clothing and heading towards the birds gathered in the trees around Central Station. from Termini.

“It’s like they’re warning each other that it’s a dangerous place and they should get away,” said Di Santo, whose company, Fauna Urbis, is contracted by authorities in Rome to disperse the starlings.

up to a million

Between October and February each year, millions of starlings migrate from northern Europe to Italy in search of warmer winter temperatures.

Their synchronized ballets – murmurs – over centuries-old churches, palaces and entrances to the ruins of the Eternal City pass by passers-by.

“I’ve never seen anything like it in my life. It’s spectacular,” said Spanish tourist Eva Osuna, taking out her phone to capture the magic.

The dark, shiny feathered birds, which each measure up to 20 centimeters, spend the day foraging in rural areas before returning to town to sleep, says ornithologist Francesca Manzia of the Italian League for the Protection of Birds (LIPU).

“In town, the temperatures are higher and the light helps them find their way around and protects them from predators,” she told AFP.

Warmer temperatures in northern Europe caused by climate change have shortened the starlings’ stay in Italy, but their numbers make them a force to be reckoned with.

Between 500,000 and a million are believed to be in Rome this year, according to an expert.

Naturally “gregarious”, according to Manzia, they stick together at night, creating collective roosts in the trees.

She insisted that starlings “do not carry disease” but cause problems “because of their droppings, which make the roads slippery and smell very strong”.

Such is the problem that, even on clear days, it is not uncommon to see Romans walking along tree-lined streets with umbrellas as protection from birds.

City officials use lights and sounds not to chase birds out of town, but to divide them into smaller, more manageable groups.

Sounds are “the easiest and most effective way” to get birds moving, said Fauna Urbis’ Valentina de Tommaso.

She works two or three times a week near Termini, which, with its lights and shelter from the wind, is a “comfortable” place for the birds to rest.

“We play recordings for about 10 minutes, with breaks in between so they don’t get used to the noise” — a tactic that is meant to be annoying but harmless, she said.

The piercing noise draws a small crowd, some approving, some less so.

“They cause a lot of problems. Walking under flocks of starlings isn’t really ideal,” said Francesco Fusco, a 55-year-old engineer.

“It’s in their nature. We’re not going to make them wear diapers!” he said laughing.

Rooney calls for ‘reasonable’ decision after tough draw at Derby