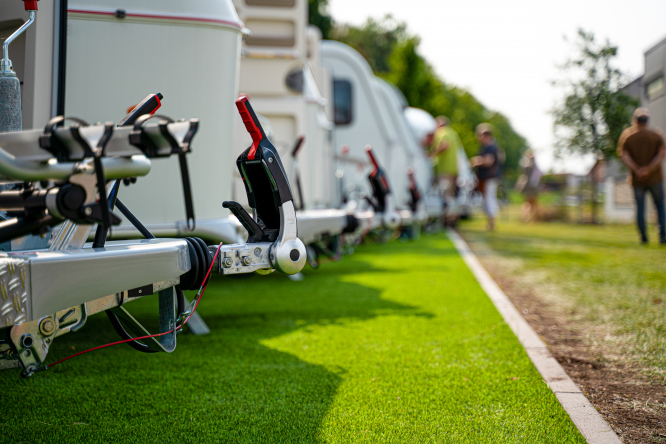 If you don’t mind a bit, a small van equipped for sleeping has been a perfect solution for generations.

You wake up to a view of the sea, mountain peaks, the medieval village church, or anywhere a vehicle less than 5m long and 2.3m wide can legally park.

However, some municipalities have decided to restrict the available parking.

Thanks to Covid, confinement and restrictions on hotels, restaurants and gatherings, many people in France have chosen motorhomes and furnished vans to get away from it all.

A quarter of the more than two million motorhomes in Europe are French. However, cities, especially around the Mediterranean and on the southwest coast, prohibit camper vans from parking in areas popular with tourists in the summer.

Anglet, near Biarritz, is an example of this, prohibiting converted vans from parking in Kostaldea, with its splendid view of the Atlantic, from May 1 to the end of October.

Worry about waste and hygiene

Jean Yves Maisonnave, director of public spaces in Saint-Jean-de-Luz, tells The connection“These are daytime vehicles and used for overnight camping, and city camping is prohibited.

“It’s not hard to see if they’re camping. When you see the curtains drawn and the steps down, it’s clear. Otherwise, it is legal parking.

Mr Maisonnave, like others in cities across France, cites the problem of hygiene and waste from campers who spend days in the same car park.

He says the problem started in the 1990s and they have been restricting unauthorized camping ever since.

Read more: These are the rules of wild camping in France

This despite the fact that some areas are equipped with garbage cans and toilets.

There are designated campsites

Jean-Paul Gourgues, deputy mayor of Anglet, insists there is nothing personal about the crackdown on van-lifers – it is more about indicating where they can and cannot.

“There is no controversy,” he said. “We have 160 places reserved on either side of the beach for motorhomes and vans less than 100 m from the beach.

“They have all amenities including water, electricity, toilets and sewage disposal.”

There are 4 km of beach in Anglet, he says, and the city simply asks campers not to spend the night in public car parks in urban areas.

Another tactic used is to install bars as low as 1.9m at the entrance to car parks, as has been done in Saint-Jean-de-Monts in Vendée. This prevents vehicles such as Ford Traffics or Citroën Jumpers from entering.

Yet a municipal worker in Anglet said the rules can be difficult to enforce: “If we can’t see inside to tell if it’s a camper or not, we can’t ticket them and make them move.”

The association of motorhomes, Uni VDL, fights against restrictions

Hervé Gautier, Director of Operations at Uni VDL, said: “It is an abusive practice that we are fighting.

“They are only allowed to erect barriers where there is danger, such as a tunnel or a bridge.

“The restrictions imposed by some municipalities are completely illegal. Vans and motorhomes have the right to access all car parking areas.

His association is taking legal action against municipalities that prevent vans and motorhomes from accessing parking areas.

Readers with their own camper vans need to be reassured: as long as you don’t put chairs, barbecues and other camping paraphernalia outside, you are legally parked, according to French law.

You can stay for seven consecutive days in free ordinary car parks (not subject to parking meters).

Maximum vehicle dimensions may apply in some locations.

Motorhome: How strict is France on the application of maximum load rules?

Motorhomes with trailers: are there any special French rules for people over 70?

Discover France by motorhome or motorhome this summer

Volunteers step in to clean up the rubbish in Marseille, the dirtiest city in France