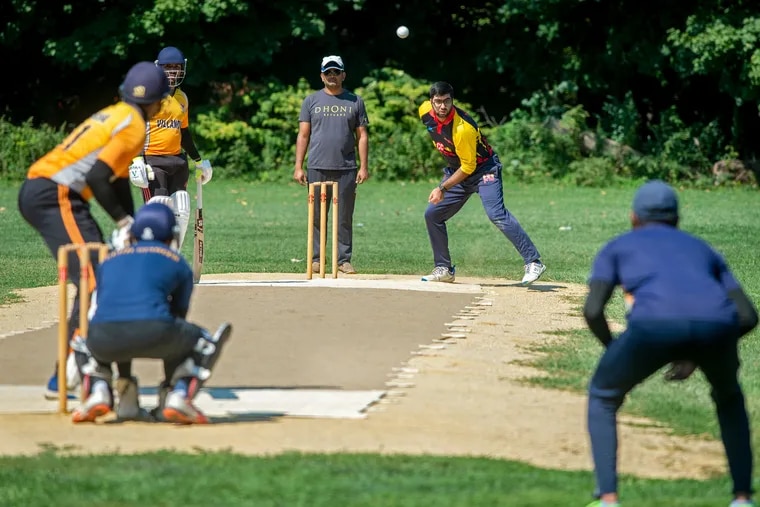 Philadelphia is a zealous sports city, with loyal fans cheering and booing in equal measure. But these are major league sports fans. The town is also home to equally avid fans who bring their enthusiasm to lesser-known sports like cricket, Gaelic football or Sepak takraw.

Many of these games were brought with immigrants settling in Philadelphia. Trish Daley, a Gaelic football enthusiast, said that in the 1950s and 1960s, Irish immigrants would have used their football club not only to play, but also to fight their way to the American dream.

“Now we remain heavily involved (in the sport), not out of necessity but to keep the tradition alive. My family eats, lives and breathes,” she said.

“Philadelphians are incredibly passionate about their sports, and that’s evident by the wide variety of sports played on our public grounds and courts,” said Philadelphia Parks and Recreation Commissioner Kathryn Ott Lovell.

Sports always help newcomers connect with others in their country and help long-time residents remember their heritage. “No matter what language you speak or where you are born, everyone can understand the universal language of sport,” said Ott Lovell.

And as local Philadelphians get involved in these lesser-known sporting activities, it also brings diversity to the sporting life of the city and, added Ott Lovell, makes the parks more vibrant.

Here are some of Philadelphia’s hidden sports.

It is said that while fighting for independence, General George Washington relaxed by playing cricket with his troops at Valley Forge.

“There’s a lot of history with cricket,” said Terence Fernandes, chairman of Prior Cricket Club, whose ground has been at Fairmount Park for around seven decades.

However, baseball’s popularity has overtaken cricket, also a bat-and-ball game where one team tries to score a run and the other team tries to stop them. Now little known to most Philadelphians, cricket is hugely popular with expats from the Caribbean and South Asian countries – India, Pakistan, Bangladesh and Sri Lanka – and they keep it alive in the city.

Fernandes estimated that there were 40–50 cricket teams between Delaware, the city, and the suburbs.

“I came as a university student from India in 1987,” said Fernandes, who played on his high school team and remained involved in the city’s cricket scene. “We would like an American to come and say he wants to learn to play.”

Watch Prior Cricket Club play cricket in Philadelphia in 2016:

Gaelic football, hurling and camogie are ancient Celtic games that Ireland has refused to forget. The most popular of the three team sports is Gaelic football.

“I like to describe (Gaelic football) as a mix of American football and soccer with a few other sports,” said enthusiastic Matthew Lawson, facilities supervisor and recreation manager at Philadelphia Parks & Recreation. Lawson added that hurling is more like a cross between field hockey and lacrosse. Camogie, he said, is basically hurling for women.

According to the Gaelic Athletic Association, in Ireland all three matches are played in “virtually every town and village in the country and throughout the Irish diaspora”. Philadelphia is a Gaelic sports hotspot with hundreds of clubs for all ages. At 50, the Philadelphia Gaelic Athletic Association (PGAA) has one of the oldest clubs in America and is developing its own athletic facility in Limerick, Pennsylvania. said PGAA Vice President Gerard Dillion.

The St. Patrick’s Day parade, Dillion said, is the start of the season that doesn’t end until the championship game around Labor Day. Dillion, who emigrated from Ireland in the late 1980s, hopes to host a college-level Gaelic football tournament in the city within the next two years.

Dating from Egypt in 5200 BC. Bocce is one of the oldest lawn games in the world and was later popularized in Italy.

The object is to roll a ball towards the target, getting closer than your opponent. It’s easy to learn, requires minimal equipment and isn’t physically taxing, making it the perfect sport for Holly Keefe, who is one of the organizers of the Grassroots Bocce League in South Philadelphia.

Often stereotyped as a game for senior Italians, pétanque has attracted a more diverse player base over the years. According to the World Bocce League, the game has also become a tournament sport and is part of the World Corporate Games, Special Olympics and may eventually be part of the Olympics. But Keefe said they were keeping it quiet.

“We don’t get so complicated. At least 95% of us had never played pétanque before. We just keep it between us and the season champion team can choose a charity,” she said.

A related lawn game but with more throwing than rolling, pétanque originated in France over a century ago. The games, sponsored by the Philadelphia Petanque Club, are held every Sunday (weather permitting) in Clark Park starting at 11 a.m.

Handball may suffer from a low profile in Philadelphia, but that’s not the case in other countries. “It’s played all over the world – Ireland, Holland, Spain, Mexico, Belgium,” said Walter Amaro, a top local player.

Amaro grew up in a bad neighborhood but there was handball and for him it made all the difference. He was 8 years old when he started playing. Now he actively promotes handball, which is most popular in the city’s Latino communities as a tool for community engagement and youth development. Starter equipment demands are minimal – the small ball used for racquetball – and a wall.

Amaro, co-founder of the Pennsylvania Handball Association, a nonprofit that tries to bring handball to underserved communities, said the best way to start is to go to a court, watch the veteran players, and then to participate.

“Our most popular lots are at 9th and Hunting Park,” he said.

Watch Amaro vying for the top ‘A’ player crown at Philly Handball:

Officially, it’s Sepak takraw but it goes by many names – Kataw in Laos, Sek Dai in Cambodia, Da Cau in Vietnam – but it inspires the same admiration among new sports viewers.

Players have been described as martial artists playing volleyball as they strive to get a ball over the net with their feet, knees, chest, or head. Thus, earning his American nickname – kick volleyball.

Two decades ago, folklorist Bill Westerman wrote of local takraw games for the Philadelphia Folklore Project: “If asked, the player or spectator will usually say that takraw is fast, acrobatic, exciting; it relies on an almost inhuman ability to fly upside down, it takes skill, timing, spontaneous decisions, quick reflexes, and so on.

It’s a team sport that originated in Southeast Asia, where it’s hugely popular, and came to Philadelphia with immigrants and refugees, many of whom were fleeing the hardships of the Vietnam War. Almost every night, said Somaly Osteen, program manager for the Greater Philadelphia Asian American Chamber of Commerce, you can see the city’s takraw players, many from the Lao community, flying through the air in Mifflin. Square Park.

Have you ever seen Sepak takraw? Looked:

Invented in 1969 by a Mexican businessman, padel is a mix between tennis, pickleball and squash.

The game was made with immigrants from Latin America and there are now around 12 million players worldwide. Miami and Houston are the biggest hubs for padel fans in the United States, but in Philadelphia it’s still the relatively underrated racquet sport.

“It was a little over four years ago and a friend invited me to see padel in the Bahamas. I fell in love,” said PADELphia organizer Scott Grote, adding that the game is easier to learn than tennis and looks cooler than pickleball.

Grote set up a pop-up padel court and pro shop at the Venice Island Recreation Center in 2019 that attracted hundreds of potential players. It was America’s first public playground. The game is marked as tennis, mostly played in doubles, and includes the use of a glass wall. Grote said a quick 15-minute lesson is all newcomers need to get started and he estimates the number of padel courts in the US – currently around 200 – will double year on year.

The player base has “grown organically in our region,” Grote said, but added, “It’s nothing compared to the growth in Europe, Latin America and Scandinavian countries.”

“Padel will be at the LA Olympics in 2028,” Grote predicted.

How to play padel:

Work produced by The Inquirer’s Communities and Engagement office is supported by the Lenfest Institute for Journalism. Editorial content is created independently of project donors.