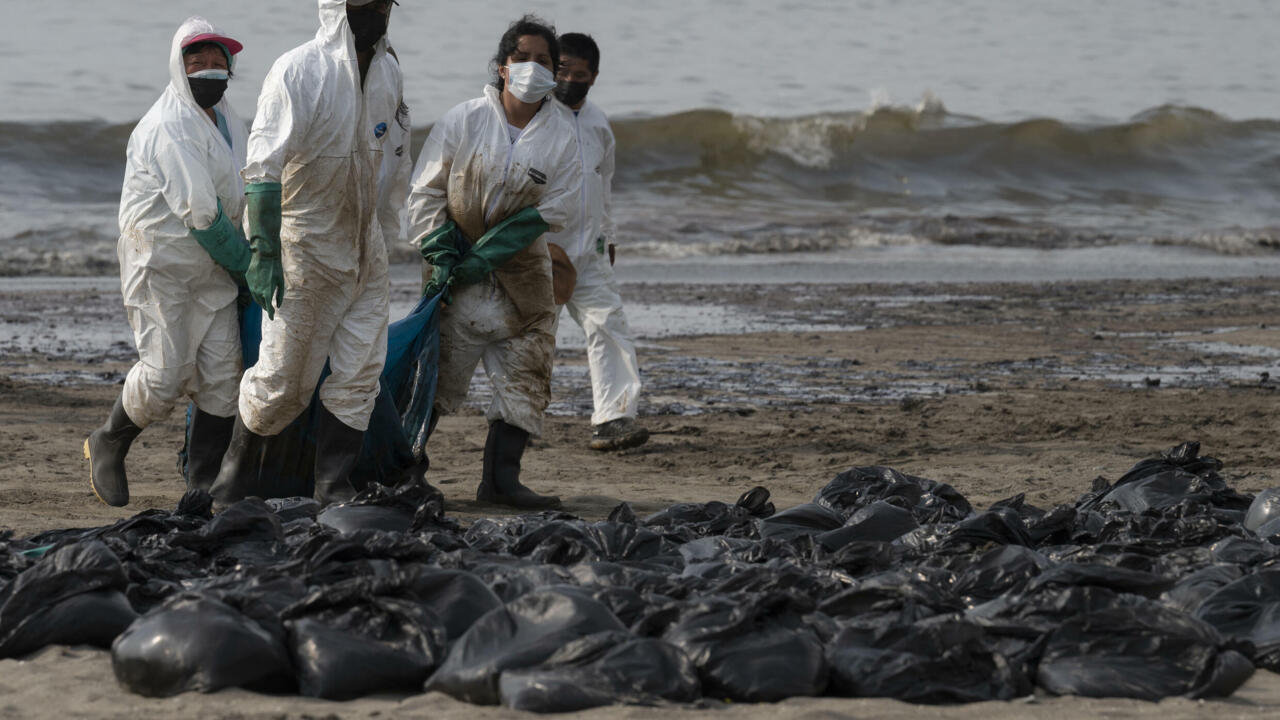 Ancón (Peru) (AFP) – At Miramar Beach, in the famous resort town of Ancon in Peru, there are no bathers despite the summer heat. Instead, it’s full of workers in coveralls cleaning up an oil spill.

Nearly a million liters (264,000 gallons) of crude spilled into the sea on Saturday when a tanker was hit by waves while unloading at the La Pampilla refinery in Ventanilla, 30 kilometers (19 miles) away. north of Lima.

Its owner, the Spanish oil company Repsol, attributed the accident to the swell caused by the volcanic eruption in Tonga, thousands of kilometers away.

“The oil reaches the beach at high tide at night (…) and settles on the shore,” Martin Martinez of the NGO AMAAC Peru, who is overseeing the cleanup, told AFP.

“We take the opportunity to remove it from the sea, that and the saturated sand,” he says.

The spill has dealt a blow to tourism in the popular resort and the businesses that make the most money during the summer season.

“There were a lot of people until Sunday. The stain arrived on Monday, and since then no one has been swimming,” said Richard Gutierrez, 48, who runs a food and soda stand on Miramar beach.

‘We can’t sell anything, there are no holidaymakers, there’s no one’ except around 100 cleaners – soldiers, Repsol goons and volunteers – removing the sand polluted with shovels to transport it to a toxic waste treatment facility.

The Peruvian government called the spill of some 6,000 barrels of oil an “ecological disaster” and demanded compensation from Repsol.

The task, which began on Tuesday, is arduous.

Workers deposit the polluted sand on blue tarps, which are dragged to a pile further inland, waiting to be transported to another site.

Nobody knows how long it will take to clean up the affected stretch of coastline, but in Miramar it is estimated that it will last at least two weeks.

The Environment Ministry said 174 hectares – the equivalent of 270 football pitches – of coastline were affected and some 118 hectares at sea.

Sea currents dispersed the oil to the coast of the Chancay district, more than 40 kilometers from where the spill occurred.

The Department of Health has identified 21 affected beaches and warned bathers to stay away.

The spill also affected hundreds of artisanal fishermen who operate on the central coast of Peru.

They rely on catches of sole, drum lorna and Peruvian grunt – fish commonly used in the local specialty ceviche, a marinated raw fish dish that Peru is famous for.

Destinations that will charge extra tourists to visit in 2022