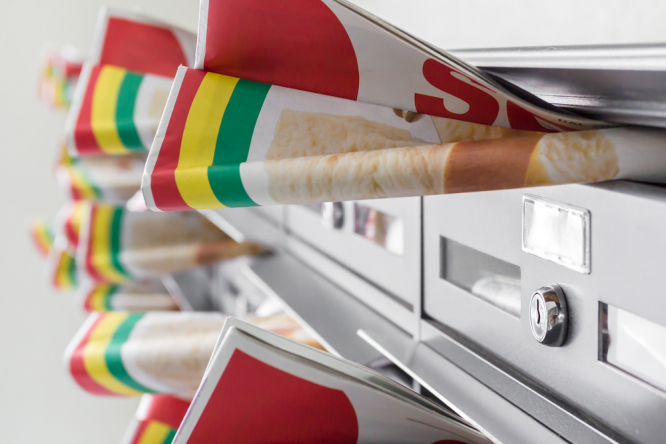 Residents of 11 areas across four regions of France will now be able to ‘opt in’ to receiving advertising material at home as part of a new three-year trial to reduce waste and waste collection costs.

If successful, the trial will be expanded to three additional areas in February 2023. To participate, residents of these areas must put a sticker on their mailbox that reads “Oui pub” (yes to advertising) to indicate that they agree to receive unaddressed leaflets, catalogs and other commercial documents.

The “Yes pub” system will replace the “Stop pub” stickers, which means residents will participate rather than not.

The aim is to reduce the amount of unwanted advertising material and paper that people receive and then inevitably have to throw away, often without even reading it.

The trial is expected to last three years and, if successful, will be rolled out across the country.

In total, approximately 2.5 million inhabitants are concerned, the areas participating in the experiment being located in Auvergne-Rhône-Alpes, New-Aquitaine, Provence-Alpes-Côte-d’Azur and Corsica.

#YesAd | From tomorrow, the automatic distribution of advertising leaflets will be prohibited in mailboxes.

This experiment, tested in 13 municipalities, is a concrete action for more sobriety and less waste. pic.twitter.com/xQOYb9YA8t

The device was first voted in the framework of the “climate and resilience” law of August 2021 according to an idea suggested by the Citizen’s Convention for the Climate (CCC).

The main objectives are to reduce waste from individual homes and to reduce the costs of waste collection and treatment in municipalities. The idea of ​​the CCC said that the system would also help to “regulate advertising to stop the incentives for over-consumption”.

In theory, companies and other distributors of the material will be prohibited from depositing mail in mailboxes that do not bear the “Oui pub” sticker.

According to a report by the Environment and Energy Management Agency (Ademe), “more than 894,000 tons of unaddressed advertising [were distributed in 2019] a large part of which was thrown away without being read, ”said the Ministry of Ecology.

Shops and businesses have started distributing “Oui pub” stickers to neighborhood residents to encourage them to stick them on their letterboxes and opt in to the new system. Posters have also started going up, with QR codes that allow residents to order their own stickers.

The new regime will be judged on its success by four factors:

From 01/09, it will be necessary to have the mention OUI PUB on his mailbox to continue to receive unprinted advertising material.
Info ➡ https://t.co/jxrBPwIkKg

The complete list of municipalities or waste disposal groups testing the system from September 1:

France cracks down on spam

Do you receive annoying junk mail in your French mailbox? Here’s how to stop it

RTL Today – “Luxembourg is committed to the fight against climate change”: the government wants to put a long-term end to “tourism at the pump”

More offshore wind power is coming to the Carolina coast