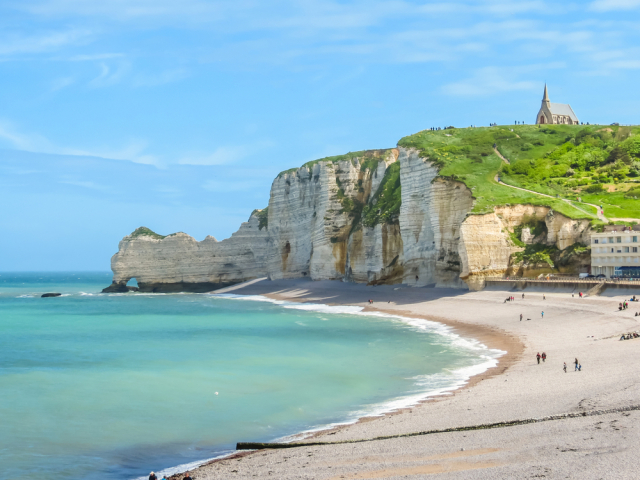 New map shows 20% of French coasts are threatened by erosion

The interactive map, compiled by FranceInfo, shows exactly how this will affect the French coastal landscape.

Using data from the Center for Studies and Expertise on Risks, the Environment, Mobility and Planning (Cerema), the experts compared aerial images dating from the 1930s to 1950s with more recent photos.

And the 59 most affected municipalities can suffer up to 1.5 meters of erosion per year on average.

The regions with a sandy coast (41% of the coast) are the most affected by a modification of the coastline: 37% are experiencing a decline, 23% an increase.

The scenarios are pessimistic: by 2100, between 5,000 and 47,300 homes could be victims of erosion according to Cerema, and the cost would reach 8 billion euros.

The Gironde, Manche and Charente-Maritime, which have long sandy beaches, are the departments most affected. Erosion will lead to a loss of 30 km2 in 50 years in Gironde, and to the south of the island of OlÃ©ron, in Charente-Maritime.

Certain specific municipalities are also particularly affected: this is the case of La Tremblade (Charente-Maritime), where some dunes retreated by 7.9 meters per year between 1945 and 2010.

But if no housing is yet threatened in La Tremblade, this is not the case in municipalities like Soulac-sur-Mer (Gironde), where a residential building built 200 meters from the sea in the 1970s was evacuated in 2014 due to erosion. and storms.

Near BÃ©ziers, concern is growing in Valras-Plage (HÃ©rault). Its barrier, built in 1995 to contain the sand, no longer plays its role.

Philippe Barbet, director of the water cycle for the BÃ©ziers-MÃ©diterranÃ©e agglomeration, says Midi Libre October 29: â€œIt aggravates the erosion of the beach in this zone of marine submersion.

Solutions are being considered to stop the process, as the range is narrowing day by day.

A new project in Normandy

In Quiberville, in Seine-Maritime, the authorities are choosing another approach, and are embarking on a new project, supported by the European Union and the government, to â€œlet the sea enter the cityâ€.

Instead of erecting walls and fences, the municipality allows the ocean to enter the land, with the beach and coastline â€œredevelopedâ€ accordingly.

Since 2017, other similar projects, called â€œflexible coastal managementâ€, have been carried out in France, initiated by the coastal group, the Conservatoire du littoral.

Professor StÃ©phane Costa, researcher at the CNRS, has been studying the decline of the Normandy coast for thirty years and believes that global warming will worsen the problem.

He told France 24 October 28: â€œThe village is already threatened with submersion by the sea and flooding from the SaÃ¢ne on the land side. In the heights, we must also face the problem of erosion.

In certain regions of France, climate change can even threaten certain archaeological sites on the coast, reported Le Figaro October 22.

The most sensitive sectors are located on the sandy coast of the Atlantic, and in the French overseas departments and territories.

Discussions on how to prevent this damage took place earlier this month, during an event organized by the National Institute of Preventive Archeology (Inrap), at the Quai Branly Museum in Paris on October 20 and 21.

The advancement of the coast in certain regions

On the other hand, in some places, the coast “advances”, as at Grau-du-Roi in the Gard.

In parts of the area, the coastline rose by more than 15 meters per year between 1937 and 2011, due to the construction of a port and a dam, which favored the accumulation of sand.