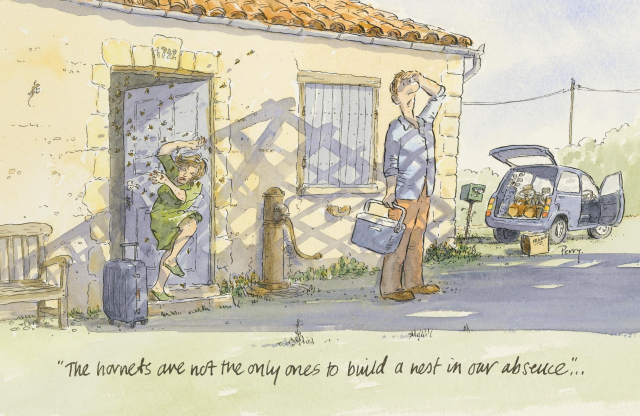 This document determines what can be built where, how high and, most importantly, what cannot be built.

Buildings are not its only mission – a PLU can turn agricultural land into a nature reserve, or determine that wetlands be drained for arable fields.

PLUs were introduced in 2000 in the hope that they would quickly cover the country, providing a cohesive system of land-use planning that could be managed from Paris with minimal hassle.

In at least one Dordogne village soon after, a mayor was nearly lynched after rumors spread that a PLU was in the works that would declare large swathes of unbuilt land as being in a flood plain, and by therefore almost worthless.

Some 22 years later, around half of rural communes still do not have a PLU, or its less detailed cousin, a communal card. Instead, planning permissions and decisions are based on national guidelines interpreted by departmental officials, who give their verdicts to the mayor.

The socialist Hollande government declared in 2016 that individual municipalities no longer needed their own PLUs. Instead, a PLU could be established for groupements intercommunes (CDC), called PLUi, thus eliminating some pressure from municipal councilors in smaller communes.

After four years, most CDCs say they will have their PLUi ready by 2025, if all goes well.

It’s an elaborate process involving referrals from CDC officials who, though qualified with master’s degrees, often have no local knowledge or experience before getting the job. They come up against elected officials who sometimes circle around them.

Once a draft plan has been approved, it is submitted for public consultation. This is perhaps the first time that people have become aware of the extent of the changes envisaged for their municipality, and often arouse multiple disputes on the parts which concern them.

When the PLUi is finally approved by the inspectors in charge of the public inquiry, it is submitted for the final approval of the CDC, then is sent to the prefect for the State’s approval. Only then does it become a legal document covering the development of the commune.

Once in place, a PLU is in effect until revised, with full revisions involving substantial changes from the original vision, usually done approximately every 10 years.

Smaller changes, such as changing the use designation of specific areas, can be made by decision of the town halls.

It is difficult to legally challenge a PLU in place, but citizens can ask their town hall to change the name of the area where they live.

The town halls covered by a PLU or a PLUi should provide access to it, either in the form of a binder, showing each classified area, or online – if the municipality or the CDC has a server capable of managing these detailed maps ( many do not).

The maps are in a standard form, folded into eight in a map book, and can be opened to view your terrain and nearby areas.

Unfortunately, the digital maps seem to be based on clumsy software from the 1990s, which is not user friendly. Consider requesting a training session with someone familiar if you plan to do detailed research.

If you have a new construction project, the PLU must tell you, before submitting an urban planning file, whether it corresponds to the vision of your municipality.

All is not lost if this is not the case.

It is possible for a PLU to be changed after it has been approved – the January Connection story about plans to build a housing estate with aircraft hangars on land zoned as agricultural is an example.

For a PLU to be modified, it requires a vote by the relevant municipal council or CDC, which must then be approved by the prefect.

What was designed to be a simple document has become more complicated, but homeowners wishing to keep house documents up to date should look for three things in their local PLUs:

The main categories of “areas” are those already “urbanized” (marked with a U), areas for construction in the future (AU), agricultural land (A) and areas protected because of their sensitive environmental character. (NOT).

In theory, since 2016, all PLUs should have three clear chapters answering the following questions: Where can I build? What environmental factors should I consider?

How can I be connected to the electricity, water, telephone and sewage networks?

The document should have an overview of the area, including economic forecasts, desired population densities, and infrastructure details to meet them.

It must also have a planning and sustainable development project, setting the general development and transport objectives for the territory. Green councils use this section to try to reduce CO2 emissions.

A technical guide to the various laws, maps and annexes should also be provided.

Last point: if land you own is moved from a no-build zone to a buildable zone, as may happen when establishing new PLUs, be sure to declare the capital gains when sales.

How do we connect our French holiday home to the mains drainage?

Aerovillages project in France: Housing development with aircraft in garage

Craftsmen in France must inform customers of building permits