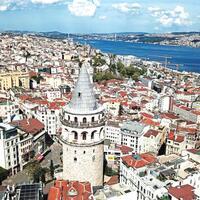 Istanbul has seen an influx of local and international visitors in the first three months of 2022, with foreign tourist arrivals to the city increasing by 136% compared to a year ago.

From January to March this year, 2.9 million international vacationers visited the city, compared to 1.2 million people in the same period of 2021, according to data from the provincial directorate of culture and tourism.

Amid the influx of tourists, hotel occupancy in the metropolis has hit 80 to 90 percent, industry officials said.

In March alone, around 1.2 million foreign tourists came to Istanbul, well above 546,000 visitors in the same month of 2021.

In January and February, the city, which is also the commercial and financial center of Turkey, received 792,000 and 957,000 foreign visitors respectively, compared to 335,000 and 350,000 visitors in the same months last year.

Data from the local tourism authority showed 258,000 Russians visited Istanbul in the first three months, up 37% on a yearly basis, while the number of Iranian tourists rose 113% to 253 000 people.

“People of Turkish origin but holding foreign nationalities such as the French, Germans, Belgians and Arabs living in European countries, have flocked to Istanbul. This has boosted the number of tourists,” said Ahmet Yaşar, head of an organization that represents hoteliers in the city.

“January-March is normally not a high tourist season for Istanbul. But this year, those who are the third generation [of Turkish migrants living in Europe], bought cheap plane tickets and found great hotel deals online and came to Istanbul to stay for two or three days. They are mostly students,” Yaşar explained.

“They stayed in hotels in the Sirkeci and Sultanahmet areas of the city, visited tourist attractions, such as Topkapı Palace and Hagia Sophia, took boat rides on the Bosphorus and enjoyed the nightlife. “

Yaşar expressed optimism that Istanbul will attract more tourists from Saudi Arabia and Egypt, as Ankara has taken steps to improve diplomatic relations with these two countries.

Meanwhile, Saudi airline Saudia resumed flights between Jeddah and Istanbul on May 7 after a two-year hiatus. A plane belonging to Saudia landed at Istanbul airport with 130 passengers on board.

The carrier, which halted flights in March 2020 due to the COVID-19 pandemic, will also resume flights between Medina and Istanbul on May 11.

Another large group of visitors in the first three months of the year were domestic travelers, according to Yaşar.

People came to Istanbul from other provinces to buy jewelry, clothes and other goods for their wedding ceremonies, he said.

“Thanks to local visitors, occupancy rates at smaller hotels in the city have reached around 70-80% and provided a lifeline for these businesses at a time when room rates were around 20-30 euros,” added Yaşar.

Startup World View is selling 1,000 tickets for hot air balloon rides near the edge of space