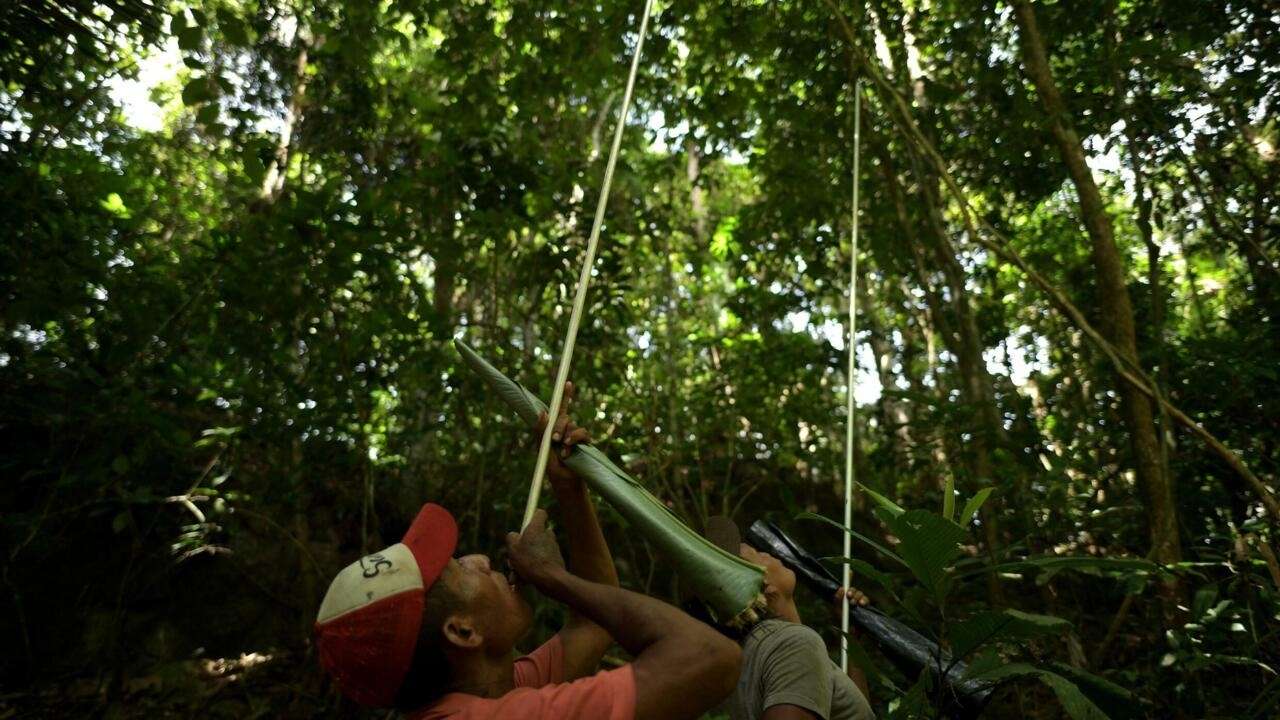 El Retorno (Colombia) (AFP) – Mauricio points his blowgun at a monkey perched high in the trees, a centuries-old hunting tradition that the Nukak people continue to practice even though they have long been displaced from their ancestral homes.

Violence and disease inflicted first by settlers and then by armed groups forced the Nukak to leave their homes and self-isolate decades ago, turning them into internally displaced people living in poverty in small towns. from the south-eastern part of the Guaviare department.

Now, the last nomads of the Colombian Amazon still occasionally venture out of their slums to pick fruit and hunt animals, dreaming of one day finding their ancestral way of life.

After discussions with his 22-year-old daughter, Yina, in their native language, Mauricio, short and broad shouldered, skillfully manipulates his metal blowgun before shooting a dart at a monkey. The poison takes effect instantly.

Other hunters carry squirrel monkeys that they have caught after miming their sounds.

“We come here to look for food,” Yina told AFP on a six-hour hike through the jungle.

The hunting team is made up of six men in jeans, caps and replica European football team shirts, and three women in shorts and crocs.

They seek out red-footed turtles, but also celebrate an unexpected bounty, having extracted honey from a tree they’ve cut down.

These views may not last forever, however.

Deforestation to make way for illegal drug crops and agriculture has threatened their way of life.

â€œThey moved us, they threw us out,â€ sighed Over Katua, 28, who has never known the jungle life that lives on in the memories of community elders.

The first Nukaks appeared in the towns of Guaviare in 1988, arriving in a deplorable state due to “diseases in contact with settlers,” according to a report by the National Indigenous Organization of Colombia.

Fourteen years later, armed conflicts between Marxist rebels and right-wing paramilitaries led to the massive displacement of the Nukaks.

The Colombian state officially recognizes the Nukak as the rightful owners of 954,000 hectares of protected jungle.

Long controlled by the Revolutionary Armed Forces of Colombia (FARC), the rebels left these regions in 2017 following the historic peace agreement they signed with the government to end 50 years of armed struggle against the ‘State.

The authorities “could not send us back because they did not clear” the jungle, said Delio Acosta, the Guaviare government official responsible for indigenous peoples.

Colombia’s “only nomadic community” is “in danger of disappearing,” according to a UN report.

In 2020 alone, the Nukaks lost more than 1,100 hectares of land due to deforestation for coca leaf plantations, according to the report.

The coca leaf is the main ingredient in cocaine, of which Colombia is the world’s largest producer.

The NGO Foundation for Conservation and Sustainable Development said the actual figure was nearly 2,900 hectares, including forest destroyed to make way for illegal roads and agriculture.

The Nukaks who fled the conflict live in slums. In San JosÃ©, the capital of Guaviare, they crowd into a park to beg.

When they go in search of food, they are forced to avoid power lines and often complain about the lack of animals.

Anthropologist Gabriel Cabrera believes that the traditions of the Nukak suffer from being forcibly semi-settled, even though they still feel attached to “moving and walking in the forest”.

In a slum, a woman with red lines painted on her face is visible.

The lines represent the shell of the red-footed turtle and are a symbol of happiness.

The loincloths were also replaced by old second-hand clothes and football shirts.

Some Nukaks drink alcohol or take drugs and there is even “prostitution,” Katua said.

“They fall into the traditions of the settlers.”