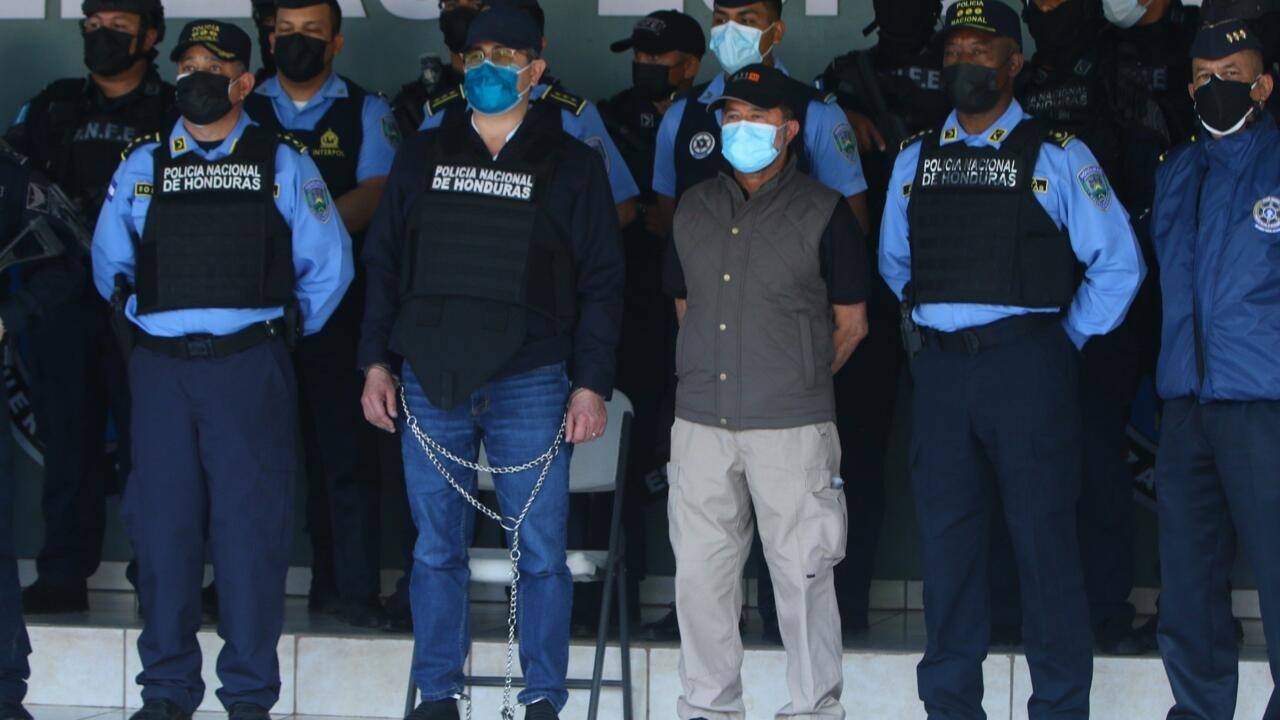 Honduran ex-president in court as US seeks extradition

Tegucigalpa (AFP) – Former Honduran President Juan Orlando Hernandez, wanted for drug trafficking in the United States, appeared on Wednesday before a judge in Tegucigalpa who will decide whether or not to extradite him.

Hernandez, who was still in office just three weeks ago, was taken to court in a convoy including armored vehicles and a helicopter from the police station where he had spent the night.

Outside the courthouse, supporters of his right-wing National Party (NP) shouted: “He is not alone! while supporters of the left-wing Free Party that recently ousted the NP from power celebrated Hernandez’s downfall.

The 53-year-old is accused of facilitating the smuggling of some 500 tonnes of drugs mainly from Colombia and Venezuela to the United States via Honduras from 2004 until as recently as this year.

In turn, he would have received “millions of dollars in bribes (…) from several drug trafficking organizations in Honduras, Mexico and elsewhere”, according to a document from the United States Embassy in Tegucigalpa .

The judge – whose name authorities are withholding for his own protection – will inform Hernandez on Wednesday of the charges brought against him by the United States, so that he can present a defence, the justice spokesman told AFP. , Melvin Duarte.

Previous extradition requests had taken no more than four months to be judged, he added.

Hernandez turned himself in to police on Tuesday, hours after the judge issued a warrant for his arrest.

In power for eight years until Jan. 27, when leftist Xiomara Castro was sworn in as Honduras’ first female president, Hernandez was taken from his home in the capital Tegucigalpa by Honduran police acting in coordination with U.S. agencies , including the Drug Enforcement Administration.

The right-wing politician – who has served two successive terms clouded by corruption allegations – offered no resistance and allowed officers to cuff his hands and feet and put on a bulletproof vest.

Dozens of people with banners celebrated outside Hernandez’s house, while in other cities people took to the streets with loudspeakers chanting “Juancho goes to New York,” using a nickname.

The U.S. Embassy document says Hernandez is accused of shielding drug traffickers from investigation, arrest, and extradition, and providing them with classified information about the ongoing investigations. Classes.

He allegedly compelled members of the police and military to protect drug shipments to Honduras and “allowed brutal acts of violence to be committed without consequence”.

Hernandez vowed Tuesday to cooperate with state authorities, saying in an audio post on Twitter that he was ready to appear in court and “defend myself.”

Although Hernandez presented himself as an ally in the US drug war during his tenure, traffickers arrested in the United States claimed to have paid bribes to the president’s inner circle.

Alleged associate Geovanny Fuentes Ramirez was sentenced last week in the United States to life in prison and fined $151.7million for smuggling tonnes of cocaine into the country – with the help of Hernandez, according to prosecutors.

Hernandez’s brother, former Honduran congressman Tony Hernandez, was sentenced to life in the United States in March 2021 for drug trafficking.

Last week, US Secretary of State Antony Blinken said that “according to multiple credible media reports, Hernandez “engaged in significant corruption by committing or facilitating acts of bribery and narcotics trafficking and using the proceeds of illicit activities to facilitate political campaigns”. .”

Hernandez denies the allegations, which he says were part of a revenge plot for traffickers his government had captured or extradited to the United States.

His lawyer, Hermes Ramirez, insisted on Monday that Hernandez enjoys immunity from prosecution as a member of the Guatemala-based Central American parliament, Parlacen, which he joined hours after leaving office.

During his tenure, Hernandez has been accused of unfairly extending presidential powers, including over the country’s judiciary and electoral tribunal.

His re-election in 2017 sparked widespread protests against an alleged fraudulent campaign in the country plagued by poverty and violence.

According to the embassy document, the drug money financed both Hernandez’s election in 2013 and his re-election.