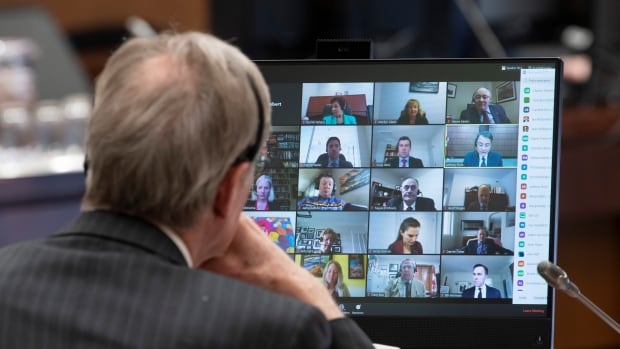 Hearing impairment among translators slows the work of parliamentary committees

A chronic hearing-related staffing shortage among federal interpreters in Ottawa has led to the cancellation of House of Commons and Senate committee meetings, slowing down the work of Parliament.

Interpreters who translate orally from English to French and vice versa help parliamentarians and members of the public follow government proceedings.

Interpreters are our eyes and ears, we need them– Claude de Bellefeuille, Bloc member

They reported an increase in hearing damage such as headaches, nausea, “acoustic shock” and tinnitus, which can cause persistent ringing in the ears, since parliamentary work shifted to virtual formats during the pandemic. .

In a recent report submitted to the House of Commons Board of Internal Economy, the Canadian Association of Professional Employees (CAPE) said that as of April 2022, approximately 10 of approximately 60 interpreters were unavailable or were only partially available to interpret due to injuries. caused by the poor audio quality they deal with at work.

André Picotte, vice-president of the union, said the interpreters are asking to be reassigned from simultaneous translation to other tasks or to leave the Translation Bureau of Public Services and Procurement Canada entirely.

Over the past three years, 12 interpreters have retired while the Translation Bureau has only hired nine.

She said their work is essential for French-speaking MPs to represent their constituents and contribute to the development of laws.

“Interpreters are our eyes and ears, we need them,” she told Radio-Canada.

Even in 2019, the Translation Bureau was looking into serious hearing problems among federal interpreters.

Their hours have also been reduced to protect their health and safety, she said.

Séguin noted that translators are in high demand and the office tries to recruit them straight out of school.

Conservative Senator Claude Carignan said the situation is urgent and requires the government to offer better conditions to recruit and retain interpreters.

“We have to take care of these people in order to be able to function. It is not normal for the work of Parliament to be affected,” Carignan said in French.

In a statement, Chief Government Whip Steven MacKinnon said his office was working closely with the House of Commons administration to ensure the availability of interpretation services.

The union has also called on the Minister of Public Services and Procurement, Filomena Tassi, to intervene directly and replace the audio systems on Parliament Hill.