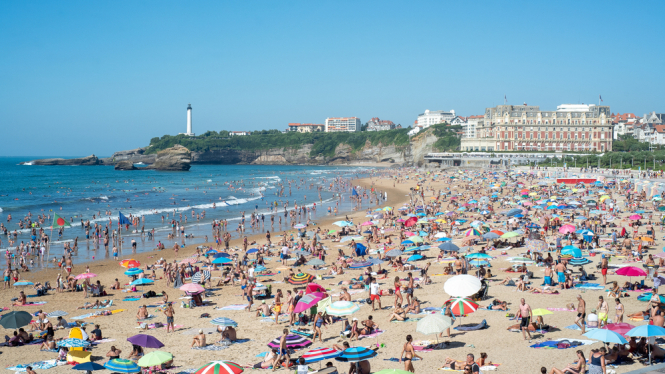 With the arrival of the traditional French return to school next week – a name for the day when children return to school after the summer and adults usually return to work after several weeks off – the tourism industry has begun to recap his summer activities.

Across most sectors, including hospitality, campsites, transport companies etc, figures show the industry is almost back to normal after two years hit hard by the Covid pandemic.

The number of nights camping is up 17% this summer compared to 2021.

“In particular the Germans, the Dutch and the British, who now represent 30% of the guests, against 20% last year,” he explained to Ouest-France.

It is expected that by the end of the summer more than 130 million camping nights will have been booked, more than the record set in 2019.

Mr Dayor said a contributing factor was hot weather, which meant stays in tents, mobile homes and chalets were increasing.

He said the only downside was that tourists spent less on other campsite facilities, such as restaurants or activities.

The number of hotel bookings in France is down just 1.2 percentage points from 2019 levels, according to consultancy and marketing firm MKG Consulting.

Laurent Duc, president of the hospitality branch of the Union of Hotel Trades and Industries, said “July was very good, although August bookings arrived late”.

The number of travelers going through travel agencies is down around 5% compared to 2019, said Jean-Pierre Mas, president of Entreprises du Voyage, which represents travel agencies.

He said, however, that the average package holiday was 20% more expensive due to increased airfares, late bookings, longer trips and people deciding to spend more after two years of disrupted travel plans. .

The most popular destinations for the French are the Mediterranean coast, Spain, Greece, Tunisia, Turkey and Morocco.

SNCF reports a record number of passengers in July and August, with 23 million people traveling on TGV, Intercités and Ouigo. This is 10% more than in 2019.

If international connections, such as Thalys, Eurostar or connections to other neighboring countries, are included, this figure rises to 28 million passengers.

Regional and local train journeys are also up 15% compared to 2019.

Eurocontrol figures show that between July 1 and August 25, French airports recorded 250,000 flights. This is around 10% less than the 275,000 flights recorded during the same period in 2019.

Christmas, Easter: discover the dates of the French school holidays 2022-23

Iran nuclear deal: another score for the Biden administration | Atalayar