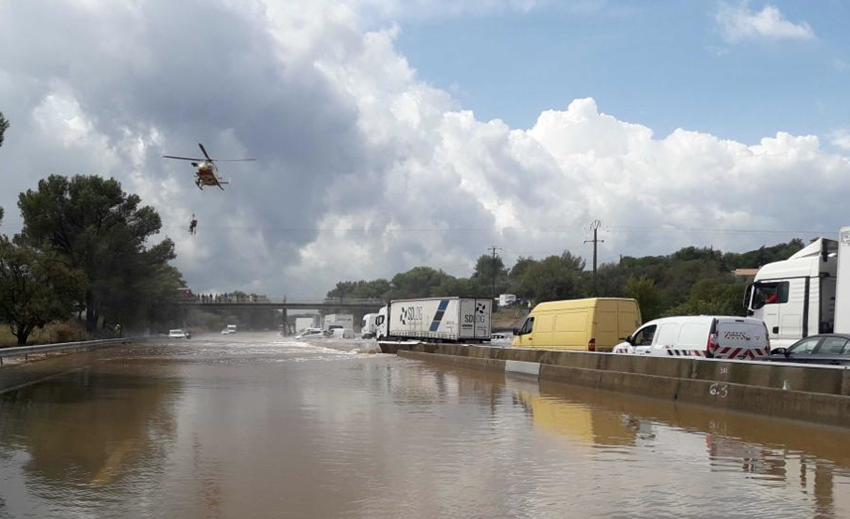 Torrential rainfall of 244 mm in just 3 hours caused flooding in parts of the Gard department in southern France on September 14, 2021. Dozens of people were rescued and one person is missing.

Hundreds of firefighters were deployed on site and carried out 450 interventions. The departmental government of Gard has declared that one person is reported missing in the town of Aimargues after falling into the Le RhÃ´ny river.

About thirty people were rescued – some by helicopter – after vehicles got stuck on the A9 motorway in the towns of Langlade and Gallargues le Montueux.

At least 10 people were transported to safety by helicopter in the town of Aigues-Vives, one of the hardest hit areas. Rescues were also carried out in the towns of Uchaud, Bernis, Calvisson and BoissiÃ¨res. Part of a building collapsed in Caissargues. No injuries were reported.

The Gard firefighters report that a person was injured in VergÃ¨ze. Other affected areas include the communes of Mus, Codognan and parts of the city of NÃ®mes.

French Interior Minister Gerald Darmanin visited some of the affected areas and expressed the government’s intention to declare a state of disaster.

The Minister declared: â€œI give all my support to the inhabitants who have suffered these bad weather and calls on them to be extremely vigilant in the days to come. The State will be reactive with a rapid recognition of the state of natural disaster.

“I pay tribute to the more than 900 firefighters and Civil Protection personnel who, faced with bad weather, carried out more than 450 interventions to help our fellow citizens,” he added.

Two months of rain in 3 hours

The equivalent of more than two months of rain fell in the south and west of the department in a few hours early on September 15, especially around NÃ®mes.

MÃ©tÃ©o-France said the intensity of the rains that hit the NÃ®mes region is historic. Up to 244 mm of rain fell in Saint-Dionisy in 3 hours, which statistically occurs less than once a century. “Never in the Gard department has such an accumulation been observed,” said MÃ©tÃ©o-France.

The South-East office of MÃ©tÃ©o-France said the rains at their peak fell at a rate of 20 mm in 5 minutes in Saint-Dionisy, and totaled 276 mm in 4 hours.

This is the second episode of intense rain of this type in France last week. Nearly two months of rain fell in a few hours in the Lot-et-Garonne department in southwestern France late on September 08, 2021.

?? #VigilanceRed in the #Gard : 2 Civil Security helicopters carry out helicopter hoisting operations for people who are carried away or stranded.
âš ï¸ In the event of rapid rising waters, take refuge in height!
â˜Žï¸ Contact 18/112 in case of#emergency.pic.twitter.com/BNybKFaC8i

Whitney and French Beau are in trouble

How to prevent hunters from using your land in France