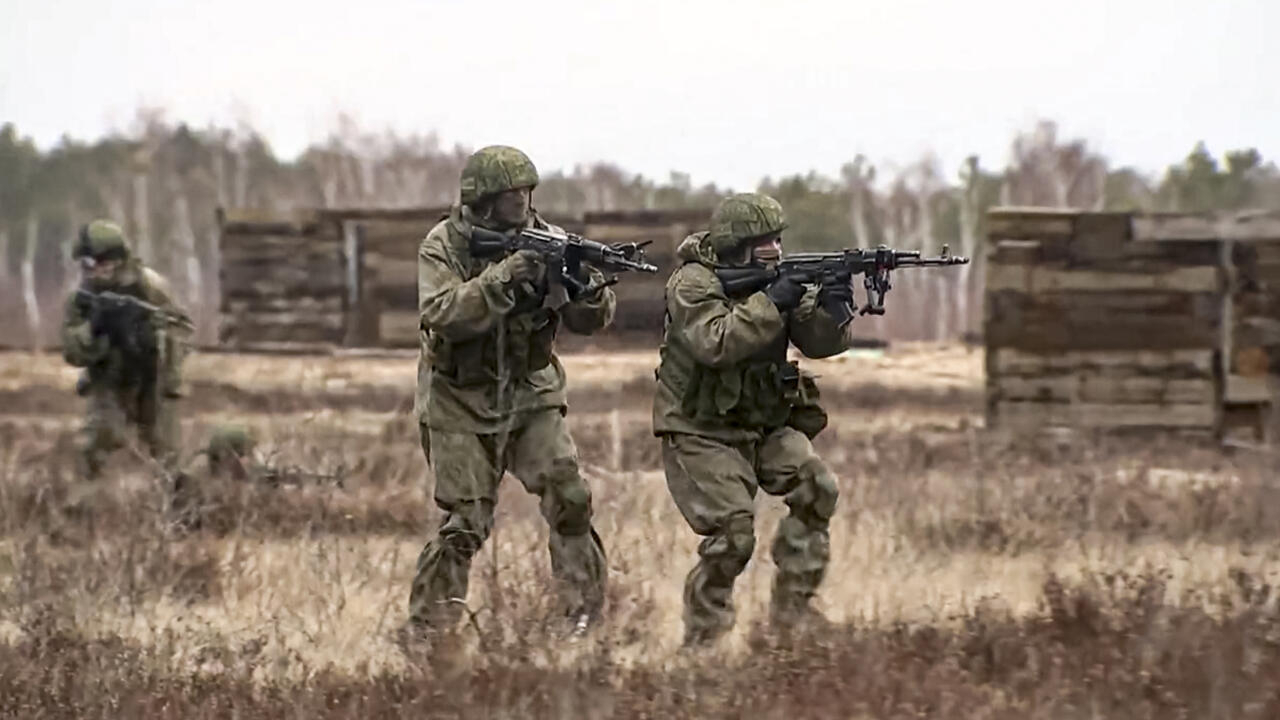 The first Russian soldiers have arrived in Belarus to take part in a new joint force announced this week, the Minsk Defense Ministry said on Saturday. Earlier today, Saudi Arabia announced $400 million in humanitarian aid for Kyiv. Read the FRANCE 24 liveblog to follow the day’s events as they unfold. All times are in Paris time (GMT+2).

At least 11 people were killed and 15 others injured on Saturday at a training ground in southwestern Russia when two assailants opened fire on a group of volunteers who wanted to fight in Ukraine, the news agency said. RIA.

The Russian news agency, citing the Defense Ministry, said the two attackers were shot after the attack in the Belgorod region, which borders Ukraine. He said they were nationals of a former Soviet republic, but gave no details.

“During a firearms training session with individuals who voluntarily expressed a desire to participate in the special military operation (against Ukraine), the terrorists opened fire with small arms on the unit personnel,” RIA said, citing a Department of Defense statement. “As a result of the shooting, 11 people were fatally injured. Another 15 people with injuries of varying severity were taken to a medical facility,” he added.

Authorities in Belgorod have repeatedly accused Ukraine of attacking targets in the city, but Kyiv has not claimed responsibility.

3:30 p.m.: Russian fuel depot on fire after being hit in Ukraine border region

An oil depot in the Russian region of Belgorod, on the Ukrainian border, is on fire after being shelled on Saturday, the governor said, as strikes increase against the region.

“We are shelled again. One of the shells hit the oil depot in the Belgorod region,” said regional governor Vyacheslav Gladkov. He said emergency services were already on the scene, adding there was “no risk” of the fire spreading. Gladkov posted a photo showing flames and plumes of black smoke rising above a building.

The official TASS news agency quoted an emergency service source as saying that the combustion depot was located in the village of Razumnoye-71, near the city of Belgorod.

Last week, Russia complained of an increase in artillery and missile strikes on its border territory with Ukraine. The Belgorod region is regularly the target of fire. The capital of the region, also called Belgorod, had been more rarely affected. But on Friday, a power plant in the city was set on fire by a Ukrainian strike, causing power cuts.

Trains are finally arriving in Kramatorsk from Kyiv, 189 days after being the site of one of the worst attacks since the war in Ukraine began on February 24.

A missile strike severely damaged a key energy facility in the Ukrainian capital region, the country’s electricity system operator said on Saturday as the Russian military worked to cut off water and electricity in the populated areas.

Kyiv Region Governor Oleksiy Kuleba said the strike did not kill or injure anyone.

Kyrylo Tymoshenko, deputy head of the office of the President of Ukraine, urged residents of the Kyiv region and residents of three neighboring regions to reduce their energy consumption during evening rush hours.

1:19 p.m.: Iran denies supplying arms to Moscow for use against Kyiv

Iran has again denied supplying Russia with weapons for use in the war in Ukraine.

Kyiv and its Western allies have accused Moscow of using Iranian-made drones in attacks on Ukraine in recent weeks. The issue is expected to be discussed Monday at a meeting between European Union (EU) ministers in Luxembourg.

The first Russian soldiers to participate in a new joint force with Belarusian troops have arrived in Belarus, the Minsk Defense Ministry announced on Saturday.

“The first Russian military convoys from the regional force group have arrived in Belarus,” the ministry said, adding that their mission was “exclusively to strengthen border protection and defense.”

Belarusian President Alexander Lukashenko announced on Monday that Belarus would take additional steps to support its Russian ally in the war against Ukraine.

To justify the new joint force, Lukashenko accused Poland, Lithuania and Ukraine of training militants to attack Belarus and cited a “direct threat”. He also accused Ukraine of planning attacks “on the territory of Belarus” from the south.

Lukashenko has allowed Russia to fire missiles from Belarusian territory since the early days of the conflict, but has mostly remained on the sidelines.

Analysts say Lukashenko has been reluctant to send troops — especially since a wave of protests in 2020 exposed his immense unpopularity at home — but is likely bowing to pressure from Russian President Vladimir Putin.

>> “Russian pressure is too strong”: Is Putin dragging Belarus into the war in Ukraine?

After several days of disruption caused by Russian strikes, the Ukrainian authorities announced on Thursday that they had managed to “stabilize” the electricity network. But in Lviv, in western Ukraine, the situation remains very delicate.

Reports by Gulliver Cragg from FRANCE 24.

9:10 am: Russian evacuations amount to “deportation”, according to Kyiv

Fighting remains active in southern and eastern Ukraine, according to the latest military sources, as Ukrainian troops advance towards Kherson.

Russian occupation forces had demanded that civilians be evacuated from combat zones to Russia. Ukrainian members of the Kherson Advocate said they would view these moves as “deportations”, not evacuations.

6:14 a.m .: Putin says Russia is “doing everything right” in Ukraine

Russian President Vladimir Putin says Moscow is ‘doing everything right’ during its nearly eight-month invasion of Ukraine despite a series of embarrassing defeats against Kyiv forces, which will receive $725 million in new aid American military.

Putin’s comments on Friday came hours after Kremlin-installed officials in the southern Kherson region urged residents to leave as Kyiv said its soldiers were advancing towards the region’s main city.

Moscow also hinted at the extent of damage to the Crimean Bridge – the only land connection between its mainland and the annexed Ukrainian peninsula – following an explosion last Saturday, saying repairs could take several months.

“What’s happening today is not nice. But still (if Russia hadn’t attacked in February) we would have been in the same situation, only the conditions would have been worse for us,” he said. Putin told reporters after a summit. in the capital of Kazakhstan.

The prince underlined “the Kingdom’s position to support anything that will contribute to de-escalation, and the Kingdom’s willingness to continue mediation efforts,” SPA reported.

The United States will send an additional $725 million in military aid to Ukraine, the State Department and the Pentagon announced Friday.

The aid comes “in the wake of brutal Russian missile attacks on civilians across Ukraine” and “growing evidence of atrocities committed by Russian forces”, US Secretary of State Antony Blinken said in a statement. communicated.

This latest package includes more munitions for the HIMARS rocket system and brings total US military assistance to Ukraine to $18.3 billion since the start of Joe Biden’s administration, the Department of Defense said. in a separate press release.

French-Toast Breakfast to support the homeless community in Paso Robles