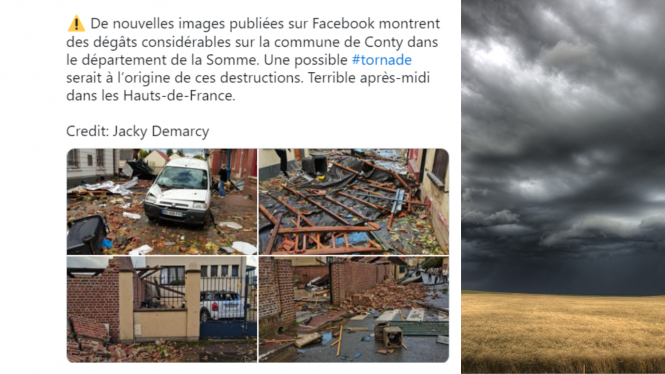 [Article updated on October 24 at 14:10 with further details of the damage in Eure.]

Several homes were destroyed in villages in Hauts-de-France and Normandy, as two mini-tornadoes hit the area during storms yesterday (October 23).

In Pas-de-Calais, the firefighters reported that there had been a “huge meteorological phenomenon centered on the town of Bihucourt in particular”, but also on Ervillers and Hendecourt-lès-Cagnicourt.

The episode brought “high winds” and “tornado-like” gusts to Bihucourt. One person was slightly injured.

Some 150 residents – about half the population – had to be evacuated and many will not be able to return home for some time, trees and overhead cables have fallen and some houses have completely collapsed. Tiles were torn from the roof of the church and chairs inside were smashed and the holy water font was knocked to the ground.

Other buildings also had their roofs torn off and almost all suffered damage.

“It lasted 10 seconds […] All of a sudden, we saw the clouds start to swirl,” Benoît-Vincent Caille, the mayor of the village, told BFMTV.

A resident said the tornado looked like “a bomb” exploding as it ripped the roof off his house, but “the most important thing is that we are alive”.

A nearby house narrowly escaped a large willow tree that fell when nearby scaffolding crashed into it.

Another resident said that when he looked outside, he could see trash cans and tiles flying through the air, and the branches snapping off his neighbour’s tree.

Jean-Jacques Cottel, mayor of Bapaume, a town near Bihucourt, said Météo France “was announcing thunderstorms but not this tornado. We were caught completely off guard.

Imposing tornadic supercell over the south of Pas-de-Calais this Sunday, October 23, seen by its eastern flank from the department of #Northat a time when the #tornado was hitting #Bihucourt. Incessant lightning and mammatus south of the mesocyclone (left in photo). © Keraunos pic.twitter.com/ENxu4SyRQx

“We couldn’t believe our eyes. […] the village was destroyed. It was a very localized phenomenon.

“Almost two-thirds of the houses have been destroyed. We saw people in disarray, in distress, but also calm. The situation was surreal, apocalyptic.

About half of the streets in the village are currently impassable because they are covered with tiles, bricks and wood.

#Severe weather François-Xavier Bieuville, sub-prefect of #Douaywent this evening to Masny and Erchin, in the presence of the mayors and the @Sdis59, to ensure the direction of the operations. On this occasion, he thanked all the services and partners mobilized. pic.twitter.com/ggQy2NyGWW

On the Conty side, near Amiens (Somme), “several houses and infrastructures were damaged”, indicated the town, specifying that in Ô-de-Selle, “about sixty buildings” were affected.

⚠️ New images posted on Facebook show considerable damage in the municipality of Conty in the Somme department. A possible #tornado would be at the origin of these destructions. Horrible afternoon in Hauts-de-France.

No one was injured but a dozen households had to leave their homes and dozens of people suffered power cuts.

The Somme and the Pas-de-Calais had been placed on yellow vigilance for thunderstorms yesterday, but such a violent episode had not been expected.

In the Eure, several roofs were torn off by the storms, in particular in Pont-Audemer-Beuzeville, where the firefighters attended around thirty incidents. Some 3,000 homes were also left without power overnight, with work to fix the problem continuing this morning.

Wind gusts of up to 136 km / h were recorded in Beuzeville, south-east of Honfleur.

Interior Minister Gérald Darmanin expressed his “solidarity with the inhabitants of the municipalities concerned”.

The East and the North of France suffered heavy storms. Several municipalities in the Pas-de-Calais caused by a tornado, caused significant damage. Violent bad weather in the Somme.
Solidarity with the inhabitants of the municipalities supported. @ Prefect62 and @ prefect80 are on site.

Autumn leaves: rules for what to do with garden waste in France