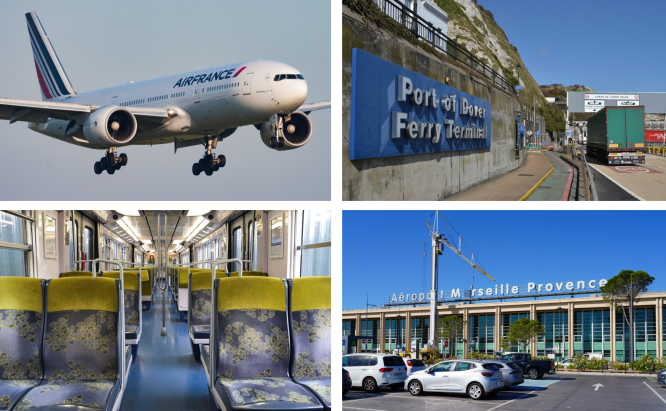 We take a look at stories regarding travel to, from and around France this week.

A one-day nationwide general strike disrupted travel across the country yesterday (29 September), but public transport is now expected to be back to normal.

The strike was called by three national unions which demanded, among other things, an increase in the French minimum wage and higher pensions.

Elsewhere, Montpellier airport reopened on Monday afternoon after a two-and-a-half-day closure after a cargo plane missed landing and nearly ended up in a nearby lake.

Doug Bannister, the head of the port of Dover, has again warned of the risk of long queues caused by the EU’s Entry/Exit System (EES), which is due to come into force in May 2023 .

When the system is introduced, non-EU citizens entering the bloc – including Britons – will need to register their passports and biometric details such as fingerprints so they can be registered.

This will allow the authorities to automatically determine how many days the person in question can stay in the EU.

Read more: Logistical concerns over EU entry/exit system due to start in autumn

Dover bosses have previously raised concerns about the implementation of these checks, saying it could mean ferry passengers have to get out of their cars to have their photos and fingerprints taken, leading to longer waits and a potential health and safety risk.

Mr Bannister has now said the introduction of the system could mean “a rocky start” to summer 2023.

“Dover is the place in the UK where it really bites,” as juxtaposed border controls mean French passport checks take place in the port rather than across the Channel.

However, the port does not yet know how it will carry out the checks.

Port of Dover EU Exit Manager Tim Reardon has previously said The connection that a tablet could be put back in cars for passengers to register their fingerprints and use facial recognition to validate a person’s passport details.

Mr Bannister repeated the idea to the BBC but added: “But we haven’t seen it. So we don’t know for sure.

“You can imagine trying to do that around a car. And especially if you have kids in the back, how do you get them to do it right? Maybe someone’s sleeping in the back back, you have to wake him up.”

He said the potentially complicated system would likely lead to “more congestion events than we’ve had this year”.

Mr Bannister then called for the government to engage with France and the EU more generally to find a way to get the process out of the way.

Mr. Reardon said The connection in May: “Before you can start doing something, you have to know what it is. For the moment, we have not arrived at square one. »

Aircraft prices up sharply in France

The price of a plane ticket for an international flight has increased by nearly 40% over one year in France.

If all destinations are taken into account, the increase is 36% on average, but domestic flights increased less – at 29% – than international flights at 39.8%.

Tickets for flights to other European destinations increased by 51.3% on average.

This latest data comes from flights taken in August, but estimates from travel agency MisterFly show September flight prices were up around 28% year-on-year.

US flights added and removed from French schedules

Air France has announced that it will not operate a Paris-Orly – New York JFK route this winter, as it prepares to launch a Paris-Charles de Gaulle – Newark route.

The Orly-JFK route is currently operating up to six times a week after being relaunched in March following a Covid-related disruption.

However, from November 1, the route will no longer be available. The airline opens its Charles de Gaulle-Newark route on December 12.

By mid-December, Air France and Delta will offer up to nine daily flights between Paris and New York, as well as other services to cities including Boston, Chicago, Los Angeles, Miami, San Francisco and Seattle.

Delta will also launch a New York-Geneva flight in the spring as well as the resumption of its Los Angeles-Paris route, suspended during the Covid.

The airline has not covered the New York-Geneva route for 30 years. Flights will resume on April 10, 2023.

Demonstration against the extension of Marseille airport

Environmental activists protested against an extension of Marseille-Provence airport on World Tourism Day this week (September 27).

Activists staged a “funeral march” between the Old Port and the La Canebière Chamber of Commerce in the old town, drawing attention to an exhibition tracing the airport’s 100-year history.

Posters advertising the exhibition and hung outside the Chamber of Commerce were covered with banners reading “RIP airport extension – STOP mass tourism”.

“This action was to denounce the project, for the climate, for the population who lives around the airport and who tolerate noise pollution,” a member of the ANC Cop 21 protest group told Actu.fr.

Several organizations – grouped under the title “Stop extension Marseille-Provence airport” – are calling for work to be stopped at the airport, although no official decision has yet been taken on the matter.

“The building permit is within the rules and the appeal [to stop the project] is not suspensive but administrative, so there is no reason to prevent the start of work,” said Philippe Bernand, Chairman of the Airport Board of Directors.

No trains between Brest and Saint-Brieuc this weekend

No trains will run between Brest and Saint-Brieuc in Brittany for 24 hours this weekend (October 1-2) due to ongoing works.

The line will close in both directions on Saturday at 1:10 p.m. and reopen on Sunday at 12:40 p.m. A rail replacement bus service will be introduced.

The Quimper-Brest line could also experience disruptions, with some trains also being replaced by buses.

SNCF Réseau will replace a hydraulic structure on the Paris-Montparnasse-Brest line around Plouigneau, near Morlaix.

“This operation will allow us to sustain the infrastructure, improve the regularity of services and maintain a high level of safety,” said SNCF.

You can find out more about the disruption on TER BreizhGo.

Rennes airport says it experienced a “clear upturn in activity” this summer after two years marked by Covid restrictions.

The airport saw 123,000 people pass through in July and August, or “three quarters of its pre-pandemic traffic”.

More than 30% of these passengers were traveling to international destinations, a figure “comparable” to that before the start of the pandemic.

The most popular service is the Rennes-Londres Gatwick, which will continue to operate throughout the winter.

Three Ile-de-France regional councilors expressed alarm at the disorganization of the Parisian public transport system, calling for a rapid policy review in an opinion piece published in Le Monde.

Charlotte Nenner, Ghislaine Senée and Jean-Baptiste Pegeon wrote that the chaos caused by late trains, breakdowns and other problems left commuters “on the brink of a nervous breakdown”.

“At a time of climate crisis and inflation, low-cost, low-polluting public transport must be a priority in our public policies,” they write.

The RER B line only managed to be on time 73% of the time in August, according to the city officials, breaking a monthly record.

This was due to various technical problems as well as a lack of personnel. They also indicated that trains on the RER D line were regularly late.

The three councilors blamed local politicians as well as the SNCF for these problems.

“There is an urgent need to review transport priorities,” they wrote.

“It’s time for a complete overhaul.”