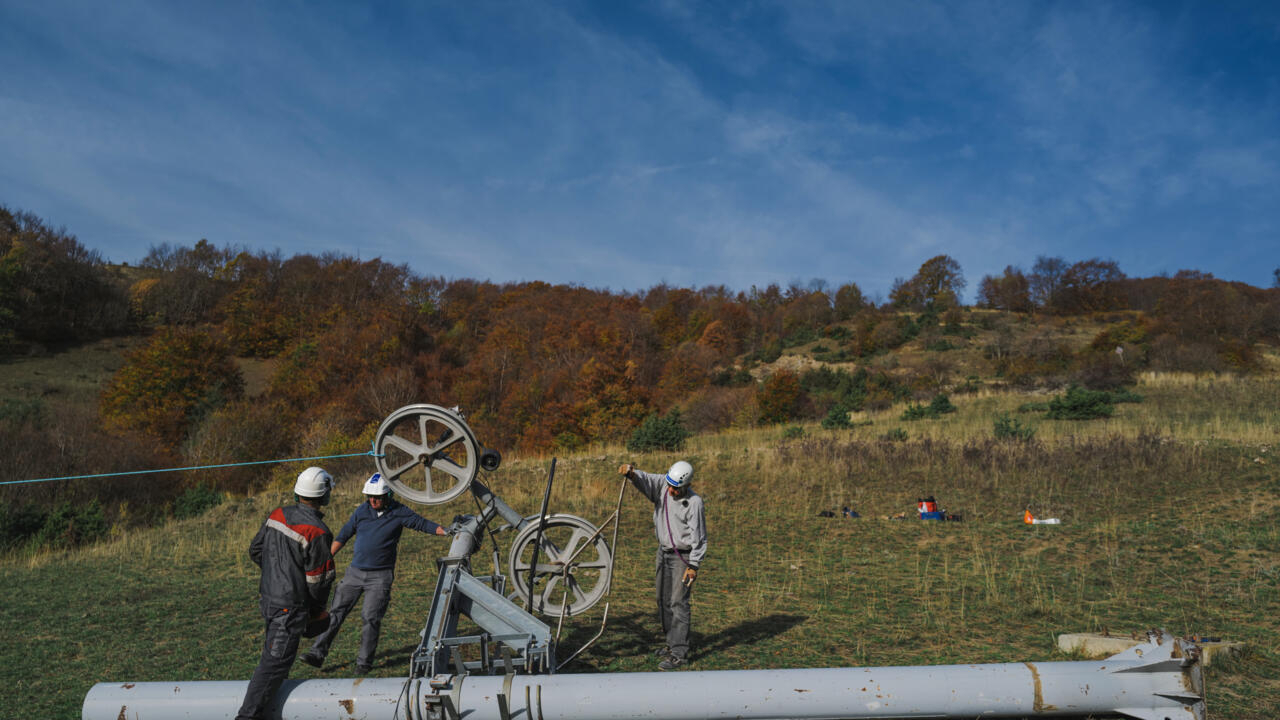 Saint-Firmin (France) (AFP) – Older residents of Saint-Firmin remember learning to ski on slopes served by one of the first ski lifts above the village, the one that will only be seen in pictures from the days when the he winter was synonymous with heavy snowfall.

Wearing hard hats and t-shirts in the bright autumn sun, volunteers recently came together to pull down pylons that have been rusting for 15 years.

Sparks flew as saws cut through the eight columns which crashed like trees on the grass of the Valgaudemar valley, the parts were then disassembled and dragged or dragged to the bucket of a waiting tractor.

“We no longer have the climate that produces constant snow, and we cannot install snow cannons here,” said city councilor Didier Beauzon, who got help from the NGO Mountain Wilderness.

The old Saint-Firmin ski lift rises to 1,550 meters (5,100 feet) and faces mainly south – a situation that reduces its chances of remaining a winter sports destination as temperatures have risen across the country. ‘Europe.

The lift, installed in 1963 as newly prosperous post-war generations flocked to the slopes, will end up in a local junkyard.

This was the 70th operation to dismantle obsolete installations, including nearly twenty abandoned ski lifts, orchestrated by Mountain Wilderness, created in Italy in 1987.

Around 3,000 such installations are rusting across the French mountain ranges, she estimates, and the aim is to encourage local authorities to remove them and restore the landscape to its original state.

“The ultimate goal is for each promoter, each agency, to take charge of the dismantling, without the intervention of an NGO or volunteers”, declared Nicolas Masson, administrator of the French branch of Mountain Wilderness.

“Removing a structure and putting things back to their natural state should be the norm, it’s a fundamental part of sustainable development,” he said. “Unfortunately, it doesn’t always seem so obvious.”

Other remains include facilities, rubble and waste from forestry and agricultural operations such as logging cables or disused gates, or from military or industrial activities.

Some present hazards, such as World War II barbed wire fences that can injure flocks of sheep or deer.

“We know we won’t be able to remove everything ourselves,” said Carmen Grasmick, one of the Mountain Wilderness volunteers.

For the NGO, the cleanup campaign also aims to inspire other communities to consider alternatives rather than focusing almost exclusively on skiing and developing outdoor activities more in step with climate change.

He notes the high costs in terms of resources to operate a resort, especially as more and more resorts are turning to artificial snowmakers to ensure piste availability all winter long.

French villages in the low altitudes of the Alps as well as the mountains of the Pyrenees are already facing the new reality of ski lifts that may never be turned on again.

“There will always be people who will be sad because that’s where they learned to ski, it happens every time,” Grasmick said.

“But there are places like here where they have the courage to move on. Because there’s nothing else to do anyway.”