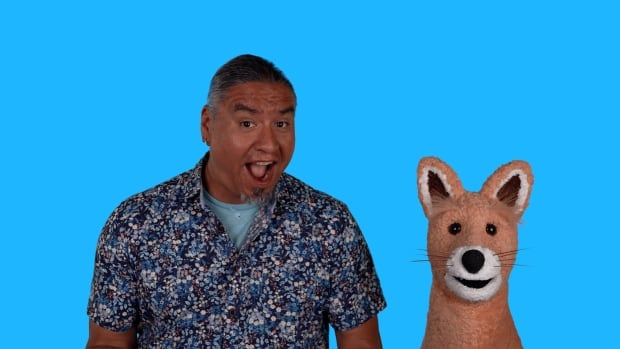 As a child of the 1980s, Trevor Gould grew in awe of Jim Henson’s puppets, dreaming of a day when he could join them.

The artist and educator from Paqtnkek Mi’kmaw Nation, Nova Scotia, is one step closer to realizing that dream now that he’s partnered with a Nova Scotia theater group to teach children the language Mi’kmaw using puppets.

Gould stars alongside Wowkwis — the Mi’kmaw word for fox — in Mermaid Theatre’s Animalingo, a series of videos for school-aged children that the organization hopes to bring to classrooms across the province.

Over the course of 10 episodes, the duo travel to the river, forest and other places as Gould shares Mi’kmaq culture, traditions and language.

“The end is to bring Wowkwis to a mawiomi, which is really me, who I am,” said Gould, a dancer, singer and powwow host.

“Members of the Mi’kmaw community who already have a sense of who I am from working in the community, it will be a lot more, I guess, familiar to them and it will be easier to connect.”

Mermaid Theater uses a mix of live puppets performed by puppeteer Jim Morrow and 2D animation to bring the lessons to life.

“The beautiful part of these stories is that we have the human world and then we get into this animated world where you see Trevor in avatar and Wowkis in 2D animation,” executive director Danny Everson said.

Lamond plays alongside Caoirigh the puppet and hopes the fantasy world they have created together is as captivating for the children as it was for her.

“I was completely engaged with this puppet,” Lamond said. “I mean, sometimes I would talk to the puppet and forget it was Jim running it.”

The episodes are designed for learners as young as kindergarten and have a Sesame Street vibe. Each episode introduces kids to a new animal, number, and color, and the lessons build on each other.

By the end of each series, Everson said students will have learned about 150 to 200 new words, and there are plans to expand the series to include more languages, such as Arabic, Mandarin and Inuktitut.

The Department of Education and Early Childhood Development said it appreciates the work Mermaid Theater is doing to share and preserve the Mi’kmaq language in this way.

The department said it was reviewing all new learning materials “to ensure it aligned with existing curricula and teaching” and looked forward to revisiting the Animalingo series.

The province is also working on other ways to incorporate Mi’kmaq teachings into the curriculum.

Next school year, a new online Mi’kmaw language course will be offered to high school students and a new grade 12 science course called Netukulimk and the Environment will be introduced in 2024.

“The course will focus on sustainability and environmental stewardship through immersive land- and community-based learning experiences and the guiding principle of Etuaptmumk, or two-eyed seeing, which brings together indigenous knowledge and western science,” the ministry said.

The Mi’kmaw series will air in October

Animalingo was inspired by the work of Mi’kmaw linguists Tom and Carol Ann Johnson at Eskasoni, known for their Mi’kmaw cult classic Chicken Run and their translation work for the TV show Vikings.

After learning about their work, Everson said he wanted to find a fun, accessible and engaging way to marry language lessons with the puppetry and animation that Mermaid Theater is known for.

For Gould, his foray into the world of puppetry and animation was an opportunity to see his history reflected and to sharpen his own language skills.

“As a non-bilingual speaker…I learned a lot about the language and I really hope people have the same experience as me,” he said.

Gould’s Mi’kmaq language series will be released online in October to coincide with Mi’kmaw History Month. The Gaelic and French Acadian series are scheduled for release in early 2023.