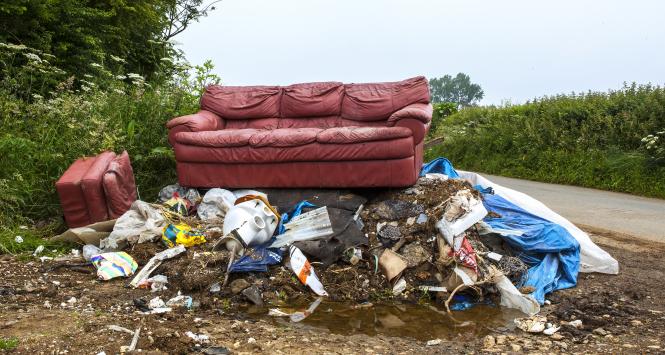 A French mayor collects litter and throws it at the culprits

The mayor of a small town in eastern France has become the latest to return illegally dumped waste to its owner and dump litter in the garden of the culprits.

Jean-Pierre Dessein took action after being exasperated by the waste dumped illegally in and around the streets.

In a bid to teach the perpetrators – and others – a lesson, he filmed himself “returning” a dozen pieces of wood that the culprits had illegally discarded. The video was later posted on Facebook.

He said: “We had warned people. Attention offenders: if you are identified, it will be ‘returned to sender’!

Mr Dessein told BFMTV the fly spill was noticed by two council workers while jogging in the area. They saw a couple abandon wooden planks next to a buried container recently set up by the commune, he said.

He added: “My employees saw with their own eyes who had thrown away these boards, and they called me immediately, because this is not a new problem in this commune.”

Mr. Dessein said he went to the authors’ home in Art-sur-Meurthe, Meurthe-et-Moselle (Grand Est) and asked to speak with the couple but no one “deigned to answer”.

He said: “So I took the boards, had my people film it for evidence, and before anyone accused us of damaging the items, we just sent them back to the office. ‘sender.”

The mayor said the couple then reacted quickly and accepted the rubbish was theirs, but claimed they were unaware they were not allowed to dump it where they did.

But Mr. Dessein replied, “I don’t want to hear it. I’ve been warning people, especially in this neighborhood, about this for months. Generally, we regularly find all kinds of waste in our streets: tires, furniture, cardboard, rubble…

“Last week, I was upset because we found an upside-down can of paint on a sidewalk… there was paint everywhere. We are only a small town of barely 1,700 inhabitants and we only have two municipal officers. If they’re wasting time scraping paint off the floor, there’s nothing else they can do.

He said that so far the council had focused on educating people but that the latest issue was “too much”, especially as the nearest landfill is only 6km away from the city.

He finished: “There is no excuse. People should know that I will no longer hesitate to use these radical methods.

Mr. Dessein is not the only mayor to have cracked down on fly-tipping and illegal waste dumping in recent years.

After having identified the culprits because of the video surveillance, Mr. Dietrich added that the waste would be “returned to the sender at home”, less than 48 hours after being landfilled.

Five vans full of trash went to the individuals’ homes and dumped the trash outside, to punish the perpetrator and force him to dispose of the contents responsibly.

In 2019, Arnaud Lécuyer, mayor of Saint-Pôtan in the Côtes-d’Armor, was irritated by a pile of garbage dumped anonymously in the city center, and decided to investigate the author.

Writing on Twitter, Mr Lécuyer said a local address was visible among the pile of boxes, gift wrap, leftover food and other household waste, urging the mayor to return the trash to its rightful owners.

In a letter accompanying the return, Mr Lécuyer included a photo of the waste, and wrote: “In this holiday season, I assume that these boxes, wrapping paper and leftover food fell from Santa’s sleigh so that he was leaving your house.

“To help him fix his mistake, I thought it would be helpful to bring them back to you.”

And in September 2018, Denis Rapinel, mayor of the town of Ille-et-Vilaine Mont-Saint-Michel, returned a huge pile of household waste to a local resident after finding it dumped in the countryside.

Surprise discovery of wild dumps for a mayor in northeastern France